BY Heather Hughes on September 30, 2022 | Comments: Leave Comments
Related : Soap Opera, The Bold and the Beautiful 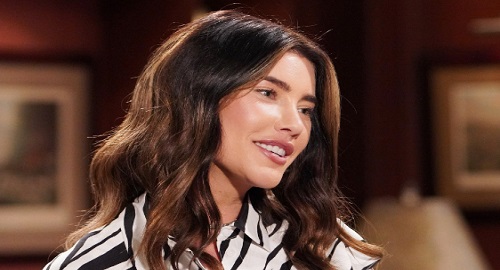 At the Forrester mansion, Thomas Forrester (Matthew Atkinson) insisted that Ridge heard Brooke Forrester’s (Katherine Kelly Lang) voice and added that she even said her name.

Ridge wanted to hear the recording one more time to be sure, so Walter Barnes (Steve Richard Harris) got another promise that this would stay quiet and played it. After Ridge once again heard what seemed to be Brooke’s voice calling CPS, he scowled and paced near the window.

After Thomas showed Walter out on Friday’s B&B episode, he told his dad that he was sorry. This didn’t make sense to Ridge, but Thomas pointed out that Brooke did threaten to call Child Protective Services.

Thomas also reminded Ridge that they both heard Brooke on that call, but Ridge protested that she wouldn’t lie to him.

At Brooke’s place, Liam wondered if Hope Spencer (Annika Noelle) knew about the CPS call yet. Since the visit went well, Liam guessed he should be relieved that whoever made the call was probably wrong.

However, Brooke argued that wrong or not, Douglas Forrester (Django Ferri) shouldn’t be with Thomas all the time. Liam agreed and found it hard to believe that Hope saw Thomas for who he really was.

Brooke argued that Ridge and Taylor didn’t see Thomas for who he really was either. After Brooke scoffed over Taylor thinking Thomas was fixed, she insisted this was all about Taylor trying to get Ridge back.

Liam hoped that maybe this CPS visit would shake Thomas up and help Hope convince him to let Douglas come back to the cabin. As Liam pondered the caller’s identity, he suggested it was weird to think they might never know who was behind it.

At the cliff house, Taylor told Steffy that Ridge was always going to be torn and felt it was time for someone to fight for her instead. Steffy countered that Ridge couldn’t fight for Taylor if she wasn’t there, so Taylor asked if she was rescinding the Aspen offer.

After Steffy assured Taylor that they were still on for Aspen, she hinted about inviting Ridge and got shot down. Taylor insisted she’d do something Brooke had never done and respect a marriage, even if she had to leave down to do it.

In a moment alone, Steffy called Ridge and was put on speakerphone so that Thomas could hear. After Steffy said Taylor wanted to leave Los Angeles, Ridge questioned why. Steffy argued that it was killing Taylor to watch Ridge constantly go back to Brooke.

Thomas urged Steffy to convince Taylor that she had every reason to stay. Steffy warned that Taylor was really down right now, but she explained the Aspen trip since Bill Spencer (Don Diamont) was putting his house up for sale.

Steffy added that this trip could be a good thing, especially since she could make sure Taylor came home with her later. Once Steffy told Ridge not to give up on Taylor, she disconnected.

Thomas picked up where Steffy left off and once again encouraged Ridge to choose Taylor over Brooke. Since Taylor was losing faith, Thomas urged Ridge not to make her suffer again – especially after what Brooke did.

Back with Steffy, she assured Taylor that she wasn’t going to babysit her on this trip. Steffy wanted to go as a daughter who gave amazing pep talks and could remind Taylor not to give up on Ridge. Taylor had concerns since Brooke would still be there when they came back.

At the Forrester mansion again, Ridge argued that Brooke wouldn’t lie to him, but Thomas thought that was ridiculous and rattled off a list of past betrayals. Thomas reiterated that Brooke called CPS on him and was trying to take his son away.

After Thomas reminded Ridge about Brooke’s voice being on the recording, he pushed his dad to accept it. “It was Brooke, Dad. It was Brooke,” Thomas declared to a pensive Ridge.