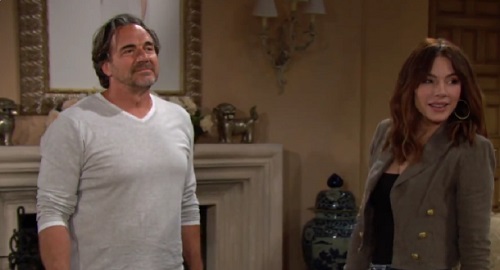 The Bold and the Beautiful (B&B) spoilers recap for Thursday, June 2, teases that Taylor Hayes (Krista Allen) had a surprise dinner for Ridge Forrester (Thorsten Kaye) – and Brooke Forrester (Katherine Kelly Lang) fumed over the discovery.

At home on Thursday’s B&B episode, Brooke thought back to a hopeful moment with Ridge before Deacon Sharpe’s (Sean Kanan) arrival startled her. Deacon mentioned Brooke ignoring her texts and calls, but Brooke insisted it didn’t feel right to respond.

Brooke also thought they shouldn’t be seen together since she couldn’t risk ruining her reunion with Ridge. Even so, Deacon had to check on Brooke now that he knew about Sheila Carter (Kimberlin Brown) pushing Brooke off the wagon.

Deacon couldn’t help but blame himself on some level since he didn’t see the warning signs with Sheila. Talk turned to New Year’s Eve and how Deacon didn’t consider the fallout of one stupid kiss either.

Brooke felt they both weren’t thinking that night, but she mostly wished Sheila hadn’t come back to town. When Deacon asked if Ridge had forgiven Brooke, he quickly realized that Ridge hadn’t.

That left Deacon agitated since he felt Ridge should get over the kiss and stand by his wife. Brooke pointed out that Ridge had moved in with Eric Forrester (John McCook) until he could figure things out, but Deacon didn’t see what there was to figure out and remained on Brooke’s side.

After Brooke said she appreciated Deacon’s support and concern, she admitted she was on her way to see Ridge.

At the Forrester mansion, Eric caught Ridge off guard by heading off to play pickleball yet again. Taylor showed up as Eric was leaving and surprised Ridge with some Chinese food from his favorite place.

Ridge assured Taylor that it was the right call to encourage Steffy’s time away. There was also talk about Sheila, but Taylor felt they had to focus on positive things and shared a close, flirty moment with Ridge.

When Brooke arrived, she was irritated over Taylor’s presence and acted like Ridge needed time alone to figure things out. Taylor pointed out that she was there because Steffy just left town with the kids, so they were processing everything.

Brooke was sympathetic, but she was also miffed about Taylor’s dinner with Ridge and wondered how long she was planning on staying.

Taylor ranted about her daughter’s husband dying in a tragic shooting and added that Steffy took her children overseas.

After Taylor told Brooke they needed time to process, she put Ridge on the spot. Taylor also wanted Ridge to tell Brooke that they needed some time.

At Forrester Creations, Quinn Forrester (Rena Sofer) tried out some new jewelry designs on a model and showed one to Carter Walton (Lawrence Saint-Victor), which he called “perfection.” However, it was obvious Carter was talking about Quinn, too.

Once they were alone, Carter admitted that he couldn’t stop thinking about Quinn no matter how hard he tried. Although Carter was denying his feelings for Quinn when Paris Buckingham (Diamond White) asked, she wasn’t wrong.

Carter said he loved Quinn, but she warned him to put his game face on and added that hurting Eric again wasn’t an option. Even so, Carter had some steamy “Quarter” flashbacks and reflected on all their amazing times together.

Although Carter had never felt that kind of connection with any other woman, he knew Quinn had rededicated herself to her marriage. Carter respected and admired that, but he was obviously in a lot of pain.

Quinn confessed that she was moved by the way Carter looked at her – and by his love for her. It was incredible and unlike anything Quinn had ever felt before. Nevertheless, Quinn was wholly dedicated to Eric the way she assumed he was loyally committed to her.

At the beach club, Eric got a text that said Donna Logan (Jennifer Gareis) was stuck in traffic and would be there soon. While Eric waited in a suite, he downed a glass of Champagne and looked deep in thought.