The Bold and the Beautiful Spoilers: Week of April 11 Preview – Steffy Wakes Up – Sheila’s Confession 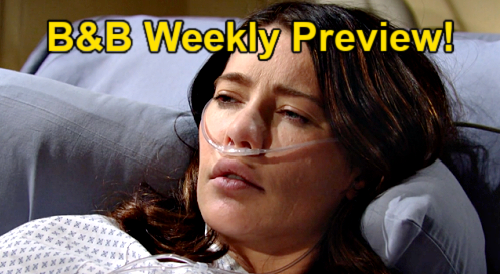 The Bold and the Beautiful spoilers preview video for the week of April 11 to April 15 reveals Sheila Carter (Kimberlin Brown) officially has a reason to panic. The preview shows that Steffy Forrester Finnegan (Jacqueline MacInnes Wood) wakes up from her coma. However, there is going to be a twist and Sheila makes a confession.

Instead of telling everyone what he knows about Sheila sabotaging Brooke Logan Forrester (Katherine Kelly Lang), Thomas continues to keep quiet.

Even though Sheila’s scheme and the fate that befell “SINN” are connected, Thomas still doesn’t say anything. Instead, he demands the truth from Sheila.

The preview for the week of April 11 shows Thomas and Sheila continuing their discussion at the hospital.

Sheila refuses to admit that she is responsible for Steffy’s condition and Finn’s death. Sheila does confess but not to pulling the trigger.

Instead, Sheila wrings her hands together and avoids eye contact with Thomas.

Pacing back and forth, Sheila assures Thomas that she is just as scared about Steffy clinging to life as he is.

While Sheila is being honest about being scared, it’s not for the same reason.

While everyone fears Steffy will die or be in a coma forever, Sheila is concerned about what happens if and when her victim wakes up.

The Bold and the Beautiful spoilers reveal that the Forrester family will continue standing vigil by Steffy’s hospital bed.

Bridget explains that they have done everything possible to help Steffy but she’s still non-responsive.

The Bold and the Beautiful Spoilers: Steffy Wakes Up Confused

Despite Steffy’s grim prognosis, Steffy’s loved ones don’t give up. Ridge and Taylor continue talking to Steffy while she’s comatose.

In one scene, Thomas orders Steffy to wake up. It is also confirmed that Hope Logan Spencer (Annika Noelle) will visit Steffy and encourage her to fight.

The end of the preview shows a shocking scene, though. Steffy finally does open her eyes. However, there is a twist as Steffy looks confused.

At the very least, Steffy might not understand why she’s in the hospital. There is a chance that Steffy’s confusion might extend beyond that, though.

Ridge doesn’t waste any time trying to get answers. Ridge immediately swoops in and asks who Steffy thinks did this to her.

“Thinks” is the keyword in this scene as it implies Steffy has some sort of memory loss. Could Steffy not remember anything about that fateful day?

How will the Forrester family deal with this new development and what does it mean for Sheila?