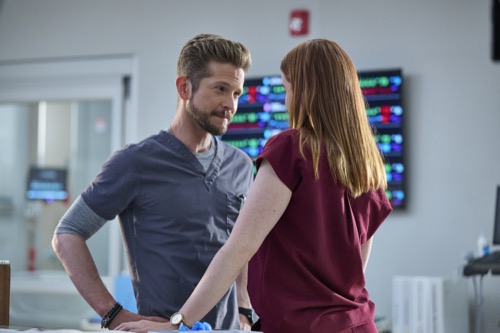 Tonight on FOX their new medical drama The Resident airs with an all-new Tuesday, October 18, 2022, episode and we have your The Resident recap below. In tonight’s The Resident season 6 episode 5, “A River in Egypt”  as per the FOX synopsis, “A college professor comes into the ER and Conrad realizes it’s a former patient of his from when he was an intern.

Meanwhile, Devon ends up admitting a man – who swears by an anti-aging regimen that he thinks is the answer to eternal life – into the hospital after he collapses.”

Tonight’s The Resident episode begins with Raja El Khoury coming into the ER, he sees Conrad and says he is the only doctor he will see, he saved his life.

Devon Marko Sytylny who said he is 72, but looks like 50 who says Chastain needs to fix aging. He has read Devon’s work and he is there because he thinks outside the box. He wants to talk to him about living forever.

AJ and Padma are home with the twins, Leela is there but she says she has to go. AJ is leaving too but says he will swing by during surgeries. Padma is left alone and the babies start crying.

Raja is being treated by Conrad who took care of him when he was diagnosed with bone cancer. AJ was giving a lecture when he threw up and couldn’t breathe. Conrad says he might have a virus. He needs to be on an IV and antibiotics while they check some things out.

Marko does 100 pushups in front of Devon, then wants to round out the day by running up the stairs when Marko grabs his chest and starts falling to the ground.

Cade is talking to Conrad when Raja is going into distress, Conrad is worried about meningitis.

Marko is in the ER and he is being checked out.

Raja has signs of Hydrocephalus, he reminds Billy that he told Raja that he would get him out of this.

Marko can’t catch his breath and his body is hurting all over. His lactic-acid is sky high, that explains it.

Raj now has an upper GI bleed. He had a rod in his back from previous cancer treatment and it looks like that is the core of his health condition.

Raj’s fiancee is in the hospital speaking to Conrad, she says he has had a bandage on his back for two years and told her it was to cover a scar. He tells her the rod punctured his esophagus, surgery is dangerous, life threatening and if he lives, he won’t be the same, he may not be able to eat, breathe on his own, trouble walking or talking.

Marko is in destress again, Devon is with him and so is Irving. Devon tells Irving they have to check that briefcase he can in with, it might tell them what drugs he was taking.

Raj’s fiancee tells Conrad to the surgery, she believes that is the choice he would take.

At home, Padma is not having an easy time of it. She calls her doctor and says the babies cry all day long, there must be something wrong. She thinks they are going to pass out. The doctor tells her just to hold them as much as she can. Padma starts crying and says this is hard.

In Marko’s briefcase, Conrad finds that he was taking a chemo drug.

Cade speaks to Conrad about her father, she feels guilty because her father’s test was negative.

Inn surgery, Raja’s heart rate is lowering, he is d-fibbing.

Devon and Irving tell Marko what happened to him, he got an pneumonia from using the chemo drug. This could have easily have killed him. Marko begs Devon to help him do a clinical trial of anti-aging, he will fund it and he will help Devon and fund other clinical trials.

Raja didn’t make it, Conrad tells Cade that he will never get used to this, she hugs him.

Devon goes to tell Kit that he has a patient that wants to write them a cheque. She says it sounds interesting.

Kit arrives home and Randolph is there making dinner for her.

Leela asks Devon if he regrets having children, he says no. And setting Padma with her babies, it is a reality check.

AJ arrives home, he finds the house a mess. The babies are asleep in their cribs and Padma is in the bathroom sitting in a corner and crying. He kneels down beside her and hugs her.