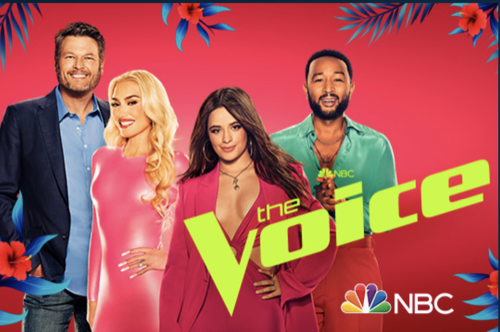 Tonight on NBC’s Emmy Award-winning musical competition The Voice airs with an all-new Tuesday, September 27, 2022, season 22 episode 4 “The Blind Auditions, Part 4,” and we have your The Voice recap right below. On tonight’s The Voice season 23 episode 4 as per the NBC synopsis, “Coaches Camila Cabello, John Legend, Blake Shelton, and Gwen Stefani all vie to discover and coach the next singing phenomenon on the fourth night of Blind Auditions.”

The Voice is back this week with the continuation of the Blind Auditions. Tanner is from California. He has been singing and performing since a young age. He cannot believe he will be singing in front of Camila Cabello. He chooses a Sean Mendes song. The coaches do not turn around but they are impressed. John, Blake, and Gwen fight for him. He picks Gwen. She is thrilled. She is off to a good start.

Next up is a female singer, playing the guitar. Camila turns first then Gwen. Sidney introduces herself after her song. She shares how her dad made her love music. She also shares how her mom overcome drinking. A lot has made her who she is. Camila loves her song and the choice she made to play the guitar. John loves her range. Sidney chooses Camila.

Tanner from Tennessee loves to sing. When he isn’t landscaping during the day, he is playing and singing at night. He plays with friends and has been in a few bands. Last year, he lost a try close friend named Will in an accident. This all put things in perceptive for him. He takes the stage. He sings a country tune. Blake turns first.

Blake likes his country mullet and his voice. He has a 90s edge to his voice with a country twist. John and Gwen also loved his voice. He ultimately joins Team Blake.

Emani sings next. No one turns which is heartbreaking. Gwen brings the hugs while John shares some advice about opening up and singing at the moment.

Kayla from the south moved to California and started taking pictures which led to singing. She hopes being here will change her life. She takes the stage and in seconds, John and Gwen turn. Gwen loves her voice. After the coaches, all commend her she chooses Gwen. Gwen also picks up another singer. Camila does the same, adding a male singer named Eric to her group. John thinks he and Blake need to catch up quickly.

A female singer takes the stage after video chatting with her sister who she wishes could be there. After singing just a few verses, everyone but Blake turns. They all plead their case as to why she should join their team. Blake also wants her because she is unlike his other team members. She chooses John.

John thinks it is time to build his team up and get back in it.