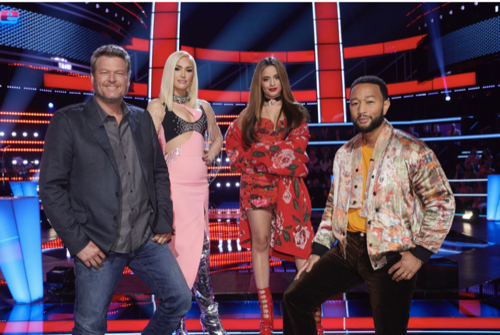 Tonight on NBC’s Emmy Award-winning musical competition The Voice airs with an all-new Monday, November 14, 2022, season 22 episode 16 “Live Top 16 Performances,” and we have your The Voice recap right below. On tonight’s The Voice season 22 episode 16 as per the NBC synopsis, “The top 16 artists perform live in front of the coaches for a chance at a spot in the top 13.”

In tonight’s The Voice episode, Carson opens thee first live show of the season. Coach Camilla is excited. This is her first live Voice show. Omar from Team Legend is up first. He takes the stage to perform a Bon Jovi song. Omar gets all of the coaches standing. Camilla loved it. John thinks his range is incredible.

Kim Cruse from Texas is up next. She is from Team Legend. She sings an Aretha Franklin song. The audience is impressed. The judges really enjoyed her performance.

Sasha takes the stage for Team Legend. She is also gutsy and chooses an Elton John song. She sings Tiny Dancer while John Legend smiles proudly. When the song is over, Gwen shares how impressed she is with Sasha’s stage presence and performance. All of the coaches agree.

Parijita takes the stage. The 17-year-old has been impressing everyone from the Voice since she first appeared earlier this season. After her performance, John shares how proud he is. Camilla cannot believe thee well of emotion she draws from at such a young age. She is the last of John’s team to perform.

Gwen’s team is now up. She discusses the young 19-male she has on her team, Kique. Blake believes he is one to watch for. Kiquee takes the stage. They love his energy. He is also a very young performer who is very talented.

Team Gwen then presents Kevin to the stage. After he wraps his performance, Blake encourages everyone to vote for him because of his talents. The rest of the coaches loved him too.

Team Gwen welcomes Alyssa to the stage. She is also young and full of potential. Gwen calls her her daughter as she has an eccentric side to her. She loves neon make-up and funky dresses. She sings a Miley Cyrus song. Camilla loved her performance but wishes she conveyed her emotions more. Gwen loved how in tune she was and how proud she made her.

Justin from Kansas will wrap up Team Gwen. He sings a Luther Vandross song. John is happy he chose the artist. Gwen is also happy because she and Blake always talk about what artists they hope to hear. This was a nice surprise and his performance great.

Its Team Camilla’s turn. Morgan takes the stage first. She sings a country song that has Blake calling it “so freakin good.” Camilla is proud.

Pop singer Eric is next. He is so excited to be in the live rounds. Gwen thinks he is a great performer. He brings a twist to the song Rumor Has It from Adele. John loves his bold decisions and performance. Camilla calls it the Eric Who Show!

Kate for Team Camilla sings next. She gives a great performance, revealing after that she has technically issues and couldn’t hear herself sing. Gwen tells her afterwards she couldn’t even tell. She did great.

Devix sings next. He chooses Sex on Fire. John and Camilla love his real artistry but John wants him to really throw himself into it all and not be so cool. Camilla agrees. He did great but has more to give.

The Top 16 playoffs continue. Its Team Blake’s turn now. Bryce is up next. He is one of Blake’s favorite singers. After his performance, John tells him he has done a job well done. Blake loves his authenticity.

Rowan takes the stage. The young teen was worried about school and now she is on The Voice. She sings a song from Grease. The audience loves it. Blake loved the classic song choice with her solid performance.

Blake’s All American singer Brayden is up next. He knows America will love him. He sings the country song, Buy Dirt. while playing his guitar. Camilla loved his effortlessness. Blake is very proud too of all he has done.

Bodie is the last performer of the evening for the show and Team Blake. Donning leather and singing a soft ballad, Bodie surprises all with his performance. He hits several impressive notes. Gwen says “wow.” She didn’t expect that. It was amazing! Blake loved it too. His performance blew them all away. He will see him in the finale! Results will be revealed tomorrow night.