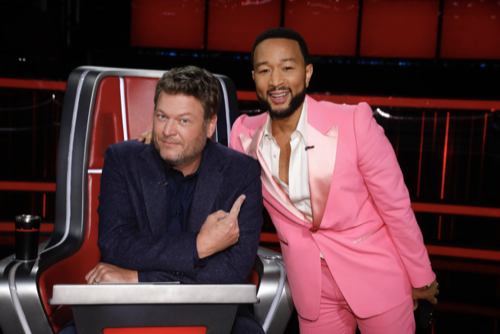 Tonight on NBC’s Emmy Award-winning musical competition The Voice airs with an all-new Tuesday, November 22, 2022, season 22 episode 19 “Live Top 13 Eliminations,” and we have your The Voice recap right below. On tonight’s The Voice season 22 episode 19 as per the NBC synopsis, “The Top 9 artists are revealed as safe by America’s votes while the bottom four compete in the Instant Save. Coaches Camila Cabello and Blake Shelton each perform with their teams for the first time.”

In tonight’s The Voice episode, Carson introduces the return of the show. It will be all about the results tonight. He is losing his voice but will go on as he discusses with the coaches how they teach their teams. Camilla jokes that her team will do what it takes.

Blake and his team take the stage to sing Southern Nights. What a way to kick off the results show. The rest of the top 13 come out to the stage. Carson wishes them luck. He then announces the first 3 that have been saved by America…Justin from Team Gwen, Team Blake’s Bryce, and Omar from team Legend.

Carson asks Devix about his Arctic Monkey performance the night before. Devix really wanted to do it so he could practice being present. Carson returns to the results. Bodie from Team Blake will stay, and Morgan from Team Camilla has also been saved along with Rowan from Team Blake.

Camilla takes the stage to perform with her team. All together they sing So Happy Together. It is down to the 7 remaining artists. They return to the stage. Carson asks Brayden about Blake’s belief in his talent. Braydon is thankful and will take that with him.

The remaining four singers will take to the stage to get a save. Eric goes first, singing a Miley Cyrus song. Camilla hopes he will get saved. He has spirit.

Alyssa from Team Gwen is now up. She sings Ocean Eyes. Gwen hopes she will get the votes she needs so they can keep working together. Devix takes the stage and sings for Team Camila. Kique is the last to sing for Team Gwen. After he sings a song from 50 Shades of Grey, Gwen is adamant America needs to vote for Kique.

It is time now for the Instant Save Voting to begin. America has 5 minutes to cast their votes and save their favorite singer out of the four remaining artists.

Carson returns with the four on the stage. All four singers take a few seconds to thank their coaches for all of their help. Carson then makes the announcement they are terrified to hear.

Kique has been saved!! The rest of the three will sadly go home. Kique looks thrilled as he jumps around.