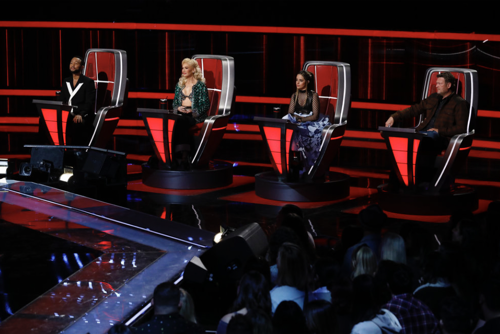 Tonight on NBC’s Emmy Award-winning musical competition The Voice airs with an all-new Tuesday, November 28, 2022, season 22 episode 20 “Live Top 10 Performances,” and we have your The Voice recap right below. On tonight’s The Voice season 22 episode 20 as per the NBC synopsis, “It’s Fan Week! The Top 10 artists perform songs selected by the fans in front of coaches Camila Cabello, John Legend, Blake Shelton and Gwen Stefani for their chance at a spot in the Top 8.”

Tonight’s The Voice episode begins with Fan Week and the top ten performing for America’s vote before two more hopefuls are eliminated tomorrow.

Team Legend’s Parijita Bastola will be singing “Scars to Your Beautiful.” John loves this song for her, it is right in her range and is an inspiring message. Blake is excited to get to talk to her, he thought it was a masterclass, combining passion wit joy. It was a lot of fun and meant a lot. Camila says she is such a fan of hers, she could feel her, their is a soulful quality to her voice. Gwen says she wants to see what she is going to sing and wear and she is gorgeous, it was a perfect song, beautiful. John loved the message, he felt it represented who she is, her voice is warm, inviting and mature for her 17 years.

Team Blake’s Rowan Grace will be singing, “I Love You,” by Billie Eiilish, an artist who she has always looked up to. Blake likes the the song is stripped down and you can really hear Rowan’s voice. Camila thinks that, she loves her tone of voice, but she thinks that was challenging, there were times where she was unsure. Gwen says her God giving tone is so beautiful and her dynamics, and she is really present in her heart when she sings, and that is really rare. John says it was an interesting choice for the fans to give her this song, it was a challenge. Blake new it was a challenge, but he feels she met the challenge. He thinks she has an incredible future ahead of her.

Team Gwen’s Justin Aron will be singing, “Just Once,” by the legendary Quincy Jones. Gwen thinks Justin has a lot to live up to. John says that his mother made it clear that she only voted for you last week, that is a voting strategy he suggest for everyone. You keep giving us beautiful performances every week. Camilla says she is such a fan of his, he is a great singer, my ears are always so happy. I never want to see you stop performing. Gwen says she was so excited that the fans had chosen that song for him. Her parents are also a number one Justin fan, you are a master.

Team Blake’s Brayden Lap will be singing, “Homesick,” by Kane Brown, it is a perfect song he says because he is missing home. Blake thinks he has a lot of potential. Camilla thought it was absolutely delightful, that was probably my favourite performance of yours. Gwen says the song fit him like a glove, he is so cute, every performance he does is similar but so engaging, he is so calming. Blake says it wonderful watching him grow artistically and vocally and he is going to be too big to come back on the show, he is so happy for him. You could almost come out here and do nothing and people would love you, the world is his.

Team Legend’s Kim Cruse will be singing, “Love on the Brain,” and John thinks it is going to be her best performance yet. All four coaches give her a standing ovation. Blake thinks her voice could kill things and bring them back to life, do it all. He doesn’t even know what to say anymore. Gwen says the look on her face when she was done, she finally got to show the world what she can do. She thinks she is underrated on this season, people are going to realize they should have made a bigger deal about her. John feels like his song was the perfect match for her voice and ability, it was so incredible, individual, thrilling and chilling, you killed it!

Team Blake’s Bryce Leatherwood will be singing, “Sand in My Boots,” and this song is current and popular right now, it is a perfect song. Camilla says her favourite singers have a tone of voice that she doesn’t get tired of and his is like butter, his performance is like sour dough bread. John loves that he is classic, he delivered the song with confidence, he sounds like he is at home, sand it so beautifully, he thinks America is going to love it. Blake says it is going to fun to look back at the season where he came from and where he is now. Blake says his hometown likes Bryce more than him now.

Team Gwen’s Kique will be singing “Call Out My Name,” by The Weekend. Gwen tells him to be real and people will see it. He is desperate for this and is going to pull out all the stops. Kique couldn’t be on the show, but he does a recorded segment that will air. Kique tested positive for COVID. John says he loves him, his voice is so rich, he loves the lower part of his range, it seems like he is so daring, doing these popular songs and it is working every time, so impressive. Gwen tells him hat she is proud to be his coach, he is flawless and that was a flawless performance. She is praying for him and voting for him and is sorry he is sick.

Team Camila’s Morgan Myles will be singing, “Tennessee Whiskey,” by Chris Stapleton and Camila says this is perfect for her, the country with he soul. John says this was like an award show performance, he loves seeing her fully in her element doing exactly what she is supposed to do. Blake says he gave her an ovation. Camila loves how she is singing up there tonight. She feels like she was totally superstars status, overtime she is getting better and better, we need you, you are just a star.

Team Blake’s Bodie will be singing, “Golden Hour” by Tupac, Blake says he has to get him a record deal. Camila this might sound dumb, when you walked in I was star struck by you, you are such an artist, how you express your ideas and your song choices. I really like you a lot. Gwen say he is in his own lane, his tone of his voice is beautiful, it is like an alternative voice but so much more. Blake says this might be the hardest song he heard someone do on the show, but it may be the greatest performance ever. Who are you? You are incredible dude.

Team John’s Omar will be singing “I Want to Know What Love Is,” by Foreigner and Omar says he is being challenged by this song. Camila says he is not going home, he has nothing to worry about. That was euphoric, only you can carry off this song. Gwen says wow, I was so excited to hear you sing that song, it is so crazy, you are so talented, emotionally it was more emotional than last week, it was so passionate and amazing. John says you are connecting to people’s hearts and emotions, it is so powerful and moving, thrilling, you are so special. The Voice exists to hear voices like yours.