The Young and the Restless Spoilers: Adam Spies On Sally & Nick While Couple Decide On Relationship Status 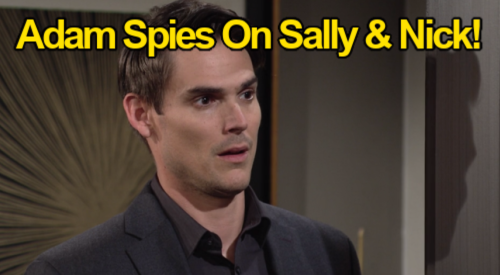 The Young and the Restless (Y&R) spoilers tease that Sally Spectra (Courtney Hope) and Nick Newman (Joshua Morrow) will have a relationship status dinner while Adam Newman (Mark Grossman) is a jealous spy nearby.

Y&R fans know Nick and Sally took their professional connection into personal territory when they hooked up at the office.

Sally and Nick sizzled once again in her hotel suite, which is where Adam caught them together.

Adam wasn’t able to get a straight answer out of Sally on whether she’s sleeping with his brother, but he has a pretty good idea anyway.

That confrontation with Nick later only added fuel to the fire since he didn’t do anything to deny Adam’s accusations.

During the week of September 26-30, Nick and Sally will hope to clear things up between them.

We’ll see the new lovers have dinner together at Society and try to nail down exactly what they’re doing here.

Will Sally and Nick decide two hookups are enough? If so, it’s not like Nick and Sally can really trust themselves not to surrender to temptation.

After all, Sally and Nick weren’t expecting round two in her hotel room, but it still happened.

There’s a certain spark that Nick and Sally can’t deny, so trying to fight it may be futile.

Of course, Nick and Sally could decide it’s too complicated and at least try to stick to professional boundaries, but they could just as easily decide to play it by ear.

As Sally pointed out, they’re single adults who can do what they want.

Although Sally still has feelings for Adam, she won’t want to get sucked into his painful vortex again.

That could make Sally more drawn to Nick, who seems nice and stable when Adam is wild and unpredictable.

Nick and Sally obviously won’t become an official couple at this point in the story, but what about these steamy encounters behind closed doors? Will those continue?

Time will tell, but Adam will definitely battle some jealousy as he spies Sally and Nick dining together.

Adam will get distracted during his own dinner with Chelsea Lawson (Melissa Claire Egan) and resolve to confront Nick later on.

The Young and the Restless spoilers say Nick and Sally’s bond will infuriate Adam, so stay tuned to see how far off the rails he’ll go.

CDL’s where you want to be for terrific Young and the Restless spoilers, updates and news, so check back often.