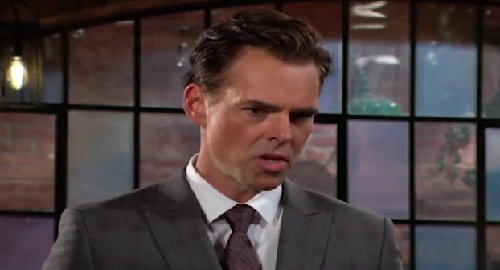 First, Chelsea will create a situation that’s rather awkward for Billy. That could involve crossing the line in podcast topics or some other way to test the boundaries of their working relationship.

Billy will feel uncomfortable thanks to whatever Chelsea tries to pull, so she may end up having to backtrack and undo the damage. Chelsea really appreciates this cohost gig, so she’ll either have to cave in or get Billy on the same page.

Meanwhile, Tessa will get quite a surprise. Mariah Copeland (Camryn Grimes) asked Kyle Abbott (Michael Mealor) to give Tessa a modeling job at Marchetti – just to give Tessa a sense of purpose while her voice is recovering.

Once Kyle talks it over with Summer Newman-Abbott (Allison Lanier), he’ll apparently move ahead with that modeling offer. Of course, Tessa may think this gig has Mariah written all over it and worry about this being a pity position.

However, Kyle may insist Tessa would be doing their brand a favor as someone recognizable in the music industry. Since Tessa really could use a career change to lift her spirits, she might decide she’s in.

Next, Elena will corner Nate and angrily voice her concerns about Imani. Nate just can’t see that Imani manipulates the situation every chance she gets and is making his feud with Devon Hamilton (Bryton James) even worse.

Imani’s latest advice was to do something big and bold to command attention. That sounds like the worst possible thing Nate could do right now, but he might defend the guidance to Elena.

Since Nate is so oblivious to Imani’s scheming and bad calls, Elena may start to wonder why. It could leave Elena worried that Nate is crushing on Imani and letting that cloud his judgment.

Elena will blast Nate for refusing to see Imani for who she really is, but he may think his girlfriend is jealous and outraged for no reason. It’s clear that Nate and Elena are on the verge of a major fight, so stick with us for more updates and news.