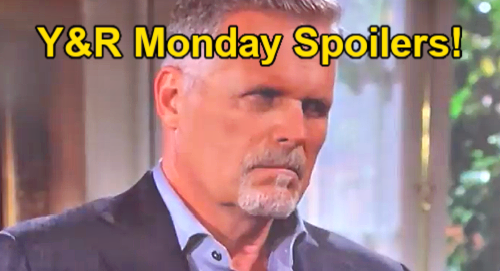 The Young and the Restless spoilers for Monday, July 4 reveal that Ashland Locke (Robert Newman) seethes over being conned by Victoria Newman (Amelia Heinle). Chelsea Lawson (Melissa Claire Egan) considers her next step. Plus, what happens once Victoria returns to Genoa City?

Y&R spoilers reveal that Chelsea stormed out after another fight with Chloe Mitchell (Elizabeth Hendrickson).

Even though Billy Abbott (Jason Thompson) reasoned with Chelsea, her regret could come too late.

Chelsea will realize that Chloe got a job offer from Sally Spectra (Courtney Hope).

While Chelsea does have the opportunity from Kyle Abbott (Michael Mealor) and Summer Newman-Abbott (Allison Lanier), she will probably think about Chloe and Adam Newman’s (Mark Grossman) warnings.

Before talking to Billy, Chelsea planned on taking the job and couldn’t understand why nobody believed she could do it.

However, Billy’s counsel made Chelsea realize she might be projecting her issues onto Chloe.

Chelsea still considers Sally an enemy. So, this could make Chelsea view Chloe as a traitor rather than a friend.

Even though Summer was able to get Phyllis Summers (Michelle Stafford) to call a truce, don’t expect things to calm down.

It’s teased that Phyllis will lose her cool. Everyone expects this but how far will Phyllis go to take down her rival?

The Young and the Restless spoilers for Monday, July 4 reveal that Ashland will be seething over being played.

After Victoria admitted her plan and left Ashland humiliated as well as broke, will he disappear?

It seems that Ashland’s story might not quite be done yet. Ashland doesn’t take being conned very well. So, expect him to come up with a new plan.

However, it is teased that Ashland’s plan will backfire. So, what happens with Victoria, Ashland, and the Newman family now?

The Young and the Restless Spoilers: Victor Newman’s Power Play

Fans can also look forward to Victor making a power play. This could be toward Ashland or it might have to do with the CEO position at Newman Enterprises.

Adam Newman (Mark Grossman) wants answers while Victoria expects to get her position back.

However, there is also Nick Newman (Joshua Morrow), who is showing an interest in getting back into the family business.

So, the dynamics with the Newman sibling could get a whole lot more complicated.