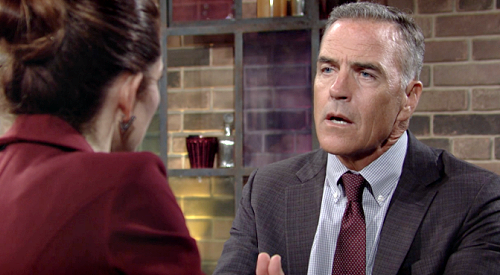 The Young and the Restless spoilers reveal that Richard Burgi has announced his Y&R exit as Ashland Locke in an Instagram Story. Ashland Locke (Richard Burgi) was only meant to be a short-term character. Even though the character certainly has made the CBS soap more interesting, it’s time to say goodbye. So, what will be Ashland’s exit story?

Y&R spoilers reveal that when Richard Burgi came on board, there was a lot of mystery surrounding his character. Ashland Locke was described as a brutal businessman who earned the nickname the “Locke-ness Monster.” Now, we have seen a few moments of his ruthlessness.

However, it seems that the true monster has yet to emerge. That will probably happen when the truth about Ashland comes out.

Right now, Victoria Newman-Locke (Amelia Heinle) thinks she has married her Prince Charming. Ashland swept Victoria off her feet, although viewers don’t trust his intentions for tying the knot.

Ashland has many secrets and has been caught in lies multiple times. Victoria even had doubts about marrying him, which she shared with Nick Newman (Joshua Morrow). It’s possible Victoria will live to regret her decision and might wish she listened to her gut.

The Young and the Restless spoilers reveal that Ashland claims to have terminal lung cancer. The man was supposed to be dead within months but seems to be in pretty good health. Ashland only seems out of breath around Victoria or others.

Fans may recall at the Victoria and Ashland’s wedding when Jesse Gaines (Jamison Jones) was cornered. Ashland was alone with Gaines and lashed out at him, but didn’t seem out of breath at all.

It’s possible that Ashland really does have cancer and he ends up dying suddenly.

However, as CDL previously speculated, it’s more likely Ashland is faking his cancer. This might be the big secret that is teased to destroy Victoria’s love story. Expect the truth to come out in the next few weeks as Y&R enters Sweeps period at the end of January 2022.

The Young and the Restless Spoilers: Richard Burgi’s Announcement

In an Instagram story, Burgi posted a video with his trusted canine companion. The actor confirmed that he is saying goodbye to the CBS soap. Although he enjoyed playing Ashland and working with the cast, it is time for a new chapter.

“I want to say thank you to all of you wonderful folks who have been so kind and generous and supportive with your words. I have such gratitude for the support. I’m moving on from the show. I have had a great year on Y&R. Just thoroughly enjoyed the great cast and crew. Such wonderful people. And, I wish you all a good start to 2022. Luck, health, love, joy. God bless!”

If Ashland is faking his cancer, he didn’t come up with the scheme for kicks. It wasn’t just to marry Victoria either.

There is a reason why Ashland went to such great lengths and it most likely has to do with a great deal of money and a dash of revenge.

When the truth comes out and Victoria finds out she’s been played, will it be too late? Or is Ashland’s exit story a sudden disappearance, death, or perhaps even murder?

Be sure to catch up on everything happening with Y&R right now. Come back to CDL often for The Young and the Restless spoilers, news, and updates.