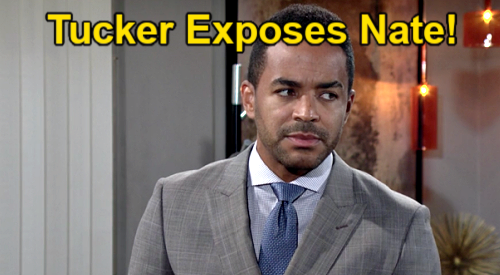 Y&R fans know Tucker is Devon Hamilton’s (Bryton James) biological father – and he’s clearly a ruthless businessman who knows how to get things done as well.

There’s no way Tucker is going to stand by and watch Devon get duped by his sneaky cousin.

Tucker has a long-standing rivalry with Victor, so he would never want Victoria and her crew to get the upper hand on his biological son.

Although Tucker has been out of the picture for quite some time, he’ll surely want to reconnect with Devon.

If Tucker blocks Victoria from becoming the majority shareholder and makes sure Nate loses his chance at the Chancellor-Winters throne, that’d go a long way toward earning Nate’s gratitude.

Unfortunately, Tucker is also a shady character with plenty of secrets, so how Tucker manages to block Victoria and Nate could be an issue.

Devon may also end up feeling deceived by Tucker if Audra Charles (Zuleyka Silver) works for him.

The company that owns the Bentley that Nikki Newman (Melody Thomas Scott) is looking into is based out of London and has an LA office.

Tucker is obviously the man who was spotted in the Bentley with Diane Jenkins (Susan Walters), so he’s got ties to this London-based company called Private Image Limited – whose business involves art and entertainment.

Noah has talked about his London former flame being an artist before, so it all adds up for Audra to be connected to Tucker, too.

Audra could be Tucker’s secret weapon and pry info out of Nate that’ll ultimately be his downfall along with Victoria’s.

One way or another, Tucker should make sure Victoria and Nate’s scheme crashes and burns!

The Young and the Restless spoilers say Tucker has many more tricks up his sleeve, so stay tuned.

CDL’s the place to be for exciting Young and the Restless spoilers, updates and news, so make us your one-stop source.