The Young and the Restless Spoilers: Tuesday, August 9 – Sharon & Nick Haunted by the Past – Victor Stonewalls Chance 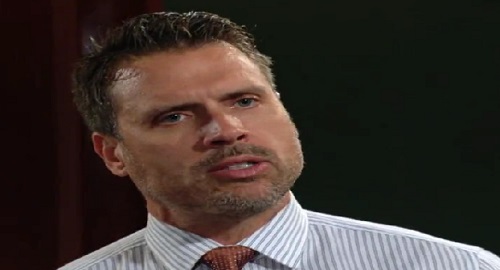 The Young and the Restless (Y&R) spoilers for Tuesday, August 9, tease that Sharon Rosales (Sharon Case) and Nick Newman (Joshua Morrow) will be haunted by the past while Victor Newman (Eric Braeden) stonewalls Chance Chancellor (Conner Floyd) at the ranch.

First on Tuesday’s Y&R episode, Chance will pressure Victor to come clean about moving Ashland Locke’s (Robert Newman) body and staging the accident. We’ll see Chance spell out exactly what he thinks happened, but Victor will no doubt brush it off as speculation.

Chance will keep pushing, but does he truly believe he can make Victor crack? This isn’t Victor’s first rodeo with the cops – and he’s faced far more intimidating men than Chance over the years!

Victor should keep his cover-up going strong and avoid giving Chance anything else to work with. Chance may warn that Victor is making more trouble for Nick and Victoria Newman (Amelia Heinle), but Victor may act like Chance is the only troublemaker here.

It’s easy to imagine Victor reminding Chance that he’s family now. Chance married into the Newman clan, so Victor might point that out and wonder whether he really wants to upset Abby Newman-Abbott-Chancellor (Melissa Ordway).

However, Chance takes his duties as a respected detective seriously and won’t back down. Victor will avoid justice for now, but Chance isn’t going to let this go.

Over with Sharon and Nick, they’ll do some commiserating. Nick and Sharon will feel haunted by the past, so this whole situation may remind them of other criminal cover-ups over the years.

The JT Hellstrom (Thad Luckinbill) case was certainly something that created a mess for both Sharon and Nick. These exes may dig deeper into the history books as well and agree that lying to the police tends to end in disaster.

Nevertheless, Victor put Nick in a terrible position – and now he’s dragged Sharon into it by confiding in her. Sharon doesn’t mind being someone Nick leans on, but the truth is she could get in legal hot water of her own now.

Although Sharon may assure Nick that his secret is safe, he’ll still battle growing concerns. The more Chance investigates, the more likely it becomes he’ll find proof that could sink all the Newmans.