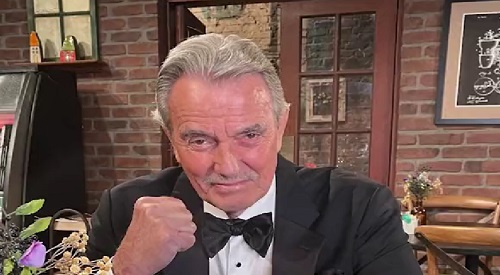 First, Devon will arrange a meeting and invite someone special to join the team at Chancellor-Winters. It’ll be Esther Valentine (Kate Linder) who’s blown away by Devon’s job offer, which he’ll promise is legit.

Devon might have a podcast that he thinks Esther would be perfect for since he’s still trying to create lots of new content. There might even be an official position for Esther to take on, but she’ll be on board no matter what.

Next, Nate will have another strategy session with Victoria Newman (Amelia Heinle). As Nate continues to scheme against his own family, Victoria may give him the heads-up about Tucker McCall’s (Trevor St. John) return and the possibility that involves Chancellor-Winters.

Of course, Victor will also get a warning about Tucker’s return to Genoa City. Since Tucker and Victor are old foes, it’s important for Victor to know what he’s up against and prepare for battle.

After Victor hears about the drama at Kyle Abbott (Michael Mealor) and Summer Newman-Abbott’s (Allison Lanier) vow renewal, he’ll make a bold move. Victor will do something to outmaneuver an enemy, so he may gain an advantage over Tucker in the war that’s inevitably brewing.

It won’t be long until Victor comes face to face with Tucker for the first time in years. You can bet that’ll bring a heated confrontation and set the stage for a rivalry to reignite.

However, Tucker has big plans now that he’s back in GC – plans that certainly go far beyond a feud with Victor. The longer Tucker sticks around, the more Y&R fans will learn about his dangerous full agenda.