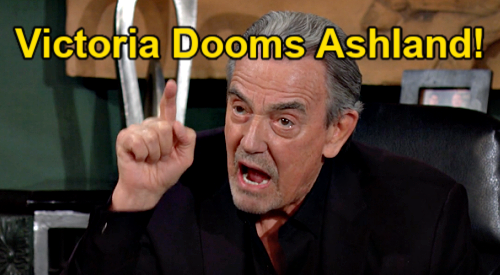 The Young and the Restless spoilers document that Victoria Newman (Amelia Heinle) is teased to forgive Ashland Locke (Robert Newman), reconcile, and threaten to run away with him. That bombshell will rock the Newman’s, with Victor Newman (Eric Braeden) and Nikki Newman (Melody Thomas Scott) being apoplectic.

Victoria did not intend to get back together with Ashland until Victor pulled the restraining order stunt.

That aggressive move turns Victoria’s annulled husband into a sympathetic figure in her eyes. It is fair to wonder how long Ashland can endure Victor’s wrath?

Young and the Restless Spoilers – Ashland Locke Hanging Around

Ashland has not left Genoa City, Wisconsin, because he loves Victoria and Harrison Locke (Kellen Enriquez). He is not lying about his feelings in either instance.

Devoted fans know that Ashland believed he was Harrison’s biological father. He had no reason to doubt that biological point until Tara Locke (Elizabeth Leiner) revealed that Harrison was Kyle Abbott’s (Michael Mealor) dad.

As for Victoria, Ashland continues to press that her love changed him. But his heinous cancer lie has rightfully outraged her and all her loved ones. That issue will not evaporate any time soon.

Young and the Restless Spoilers – Victor Newman Incapable Of Backing Off

Victor has long been known as a control freak. However, he sees all the moves he makes regarding his family as protective measures.

Victoria has repeatedly told her father not to interfere in her love life, with Billy Abbott (Jason Thompson) being the most famous target of the Moustache’s disdain. Ashland’s efforts pushed Victor to seek his ouster from GC before Victoria returned from her spa trip with Nikki.

Ashland knows that Victoria still has feelings for him. Victor knows that as well. That is why he took the extreme step of working with Michael Baldwin (Christian Le Blanc) to engineer Ashland’s forced exit with Kyle’s legal stamp of approval.

Young and the Restless Spoilers – Victoria Newman’s Buttons Are Pushed

Victoria can not believe that her father used a little boy as a pawn in yet another personal chess game. Devoted fans are reminded that Victoria is not one of Victor’s chess playing partners, which is telling.

Ashland was hoping that Victoria would eventually recognize that her influence created the positive impact he needed. She helped him become a changed man.

Ironically, Victor’s strategy to get rid of Ashland serves to reunite him with Victoria. This couple’s long-term survival is the next story to be told on Y&R.