The Young and the Restless Week of September 19 Preview: Nikki Goes to LA – Blackmails Deacon to Destroy Diane

BY TaylorRios2021 on September 18, 2022 | Comments: Leave Comments
Related : Soap Opera, Spoiler, Television, The Bold and the Beautiful, The Young and the Restless 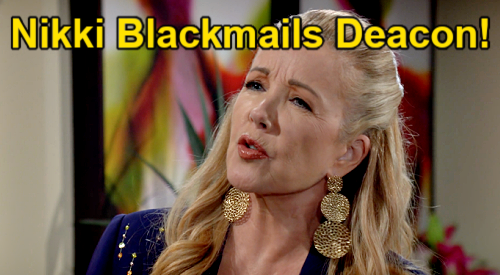 The Young and the Restless preview for the week of September 19 reveals that Nikki Newman (Melody Thomas Scott) has one more trick up her sleeve. Nikki isn’t going to rest until she boots Diane Jenkins (Susan Walters) out of Genoa City. This time, Nikki goes to Los Angeles and blackmails Deacon Sharpe (Sean Kanan) into helping her.

However, their efforts have failed so far. Nikki is frustrated and fed up. This has led Nikki to make the decision to head to Los Angeles.

During the week of September 19, Nikki will check into a hotel in Los Angeles.

Nikki sends a message to Deacon to meet with her.

Judging by Deacon’s jaw-dropping in the weekly preview, he doesn’t know that it’s Nikki that has summoned him.

The two will play a few mind games, including Deacon telling Nikki how good she looks.

It is going to take a lot for Nikki to remain strong. Victoria Newman (Amelia Heinle) was concerned this trip would be a bad idea.

However, Nikki insisted that she is stronger than she used to be. Of course, aren’t those everyone’s famous last words?

The Young and the Restless spoilers reveal that Nikki will explain to Deacon that the truth wasn’t going to stay buried forever. In order for Deacon’s life not to be further complicated, he has to help Nikki.

The Newman matriarch tells Deacon that he will be just fine as long as he does everything she says. When Deacon asks what’s first, Nikki only says they are going to get some revenge against Diane.

It’s not known what Nikki’s plan is but Deacon already has his hands full in Los Angeles. Sheila Carter (Kimberlin Brown) isn’t easy to rein in.

So, we have to wonder if Sheila will somehow get involved in Nikki and Deacon’s deal. After all, Sheila does have history in Genoa City.

The Young and the Restless Spoilers: Diane Jenkins’ Fate

There is no word on Walters leaving the CBS soap. Plus, soaps love to draw out suspense and drama.

So, Deacon might agree to work with Nikki to run Diane out of town. However, Deacon could also double-cross Nikki.

If Diane finds out about Nikki’s plan, she will strike back.

Something tells us that this story isn’t close to ending. In fact, it could be just the beginning.

Be sure to catch up on everything happening with Y&R right now. Come to CDL for the best and most accurate The Young and the Restless spoilers, news, and updates.

Nikki and Deacon – together again! 🙌 Tune in to #YR and #BoldandBeautiful this week for an epic @CBS crossover! pic.twitter.com/PQTMlY8lJX