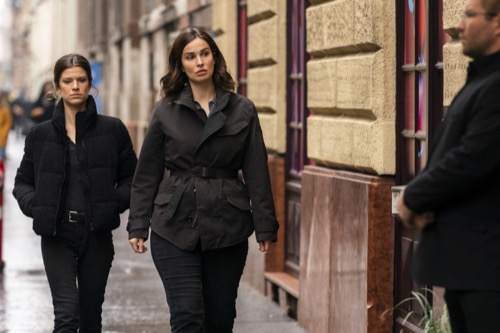 Tonight on CBS FBI: International airs with an all-new Tuesday, January 10, 2023 season 2 episode 10, “BHITW” and we have your FBI: International recap below. In tonight’s FBI season 2 episode 10 as per the CBS synopsis, “When an American basketball player for a Lithuanian team goes into cardiac arrest, the Fly Team investigates along with Zoey McKenna (Kelley Missal), the new agent appointed by Dandridge.”

In tonight’s FBI International episode, Legat Dandridge wanted Forrester gone so much that he’s already replaced him. Her name was Zoey McKenna. Dandridge added her to the team without Forrester’s input or even a cordial word to him. Forrester just showed up one day and there she was.

It posed a problem for him because he hadn’t told his team that he was being transferred just yet and so Dandridge told him to tell them before he did it for him. Forrester said he’d say something when the official paperwork came. He was also warned by Dandridge to focus on the case and that’s what he did. The FBI flyteam were called in because an American mysteriously fell into a coma after a night out with his teammates. The victim’s name was Derrin Vaughn.

Derrin was a basketball player. He played in Lithuania. He and his teammates went to Serbia for a bachelor party and they went to a strip club where Derrin lost consciousness. But there was an issue. Derrin fell into a coma after going in the backroom with one of the dancers.

The same stripper didn’t even want to tell his friends what happened. They instead tried to cover it up by getting the security team keeping everyone out of the area and so Derrin’s friend Bryan Moncrief pushed past the guard to find Derrin passed out on the floor. He went to go check on his friend. The security team at the strip club beat him up and they claimed he got rough with them.

There was a lot of corruption in Serbia. The officers there even put his hands on Bryan’s neck because Bryan was denying using a knife to threaten anyone. Forrester landed in Serbia and one of the first things he did was talk to Bryan. The police there were trying to charge Bryan.

They wanted to put him prison for ten years just for trying to check on his friend and so Forrester was fighting against a lot when he started working this case. He also found out that the victim had gotten into a fight with his fiancé before he went to the strip club. Derrin it seems had called off the engagement because he was told Cici cheated on him.

Something that Cici denied. She was a social media influencer and she denies ever cheating on Derrin. She was one of the people at the hospital. She was there after Derrin died during surgery.

The Serbians were trying to claim he did drugs that night. They said he had a problem with his heart after going too hard and that’s why he died, but Forrester and his people were butting heads with the local cops and Smitty felt compelled to report it to Eurpol. Europol found out what was happening. They came down on the Serbian government. And that forced the local police into finally cooperating.

Once the local authorities fell into line, the FBI were finally able to get somewhere. Derrin had used a party promoter to plan his bachelor party and even after he called off the wedding he still wanted to party. He turned to a man named Milos Zoran to help with that. Milos was known for setting up tourists to get drugged and robbed and so everyone figured that’s what he did with Derrin’s group. They later questioned Milos. He admitted the strip club was connected to the local mob. The team then went to the strip club with the local police and arrested everyone and it turns out they were claiming they had nothing to do with Derrin’s death.

Derrin was considered too high profile for them. They wouldn’t make a move on him if it could get out into the media and so they really did have too much to lose to risk drugging him. But then that pointed to someone else. Someone like his former fiancé. Cici inherits about fifty percent of Derrin’s trust if he dies. They were going to get married. Derrin included her before the relationship fell apart. The FBI talked to Cici. She seemed pretty broken up that he died. Raines didn’t think she would do this. Also, they found out that Derrin was drugged with a specific drug that could only be found in Switzerland.

The basketball team’s trainer was Swiss. His name was Noah Muller. He claimed that he gave those drugs to Bryan and Bryan was denying it. But then the drugs were found in Bryan’s bag. Which didn’t make sense. Why would he hold onto the murder weapon if he killed his friend? The Serbs were okay with blaming a black man, but Forrester wasn’t so quick to jump the gun. Forrester had his team to look into who else would benefit from Derrin’s death and the answer was Bogdon Vidmar. He was the star of the basketball team until Derrin joined and took his spot. And Bogdon got stuck on the bench.

Bogdon and Noah were good friends. Noah even went to Bogdon’s wedding and so the FBI realized they planned this together. They drugged him on the night out. They basically killed him together. But proving it was tough. They tried to trick them and that didn’t work. The feds next tried wire tapping Noah’s phone. And they got them talking about setting up Bryan.

Noah and Bogdon were arrested. Noah turned on his friend first. He confessed to everything. The plan wasn’t to kill Derrin. It was just supposed to get him to test dirty on the drug test and get booted from the team. They hadn’t known about Derrin’s heart condition. Derrin hid it from his friends.

The only one who knew was Cici and she loved him too much to tell a soul.

And so Bryan was later released after he was told what happened, but he something he said convinced Forrester not to accept his own transfer. Forrester decided not to go without putting up a fight.