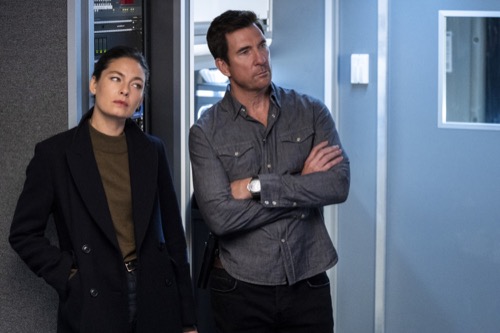 In tonight’s FBI Most Wanted episode, a stranger showed up at Phil Grady’s home demanding that he’d tell them what he did with her. Phil didn’t know what she was talking about. He turned her away at the door. But that wasn’t good enough for this stranger. She broke into his house.

She shot the man he was with and she took him hostage. She apparently didn’t like it that she was being ignored. She also kept asking Phil what he did with his mysterious “her”. Phil still didn’t know what she was talking about. Phil is a cop. He was facing charges for roughing up two homeless women and he was meeting with his lawyer about turning himself in when this happened.

It was the lawyer that got shot. It seems that Phil likes to target homeless women. The woman that showed up at his door with a gun had looked homeless only she wasn’t one of the woman he hurt. She was Mya Fogelman’s mom. She was Kim Fogelman. Her daughter died in a mass shooting.

All Phil did was notify the parents after the shooting. But Kim became convinced that he lied to her husband. That her daughter was simply out there and no one was looking for her. Kim killed Phil once he couldn’t help her. She sent a video of his dead body to a conspiracy theorist with a television show.

Her name is Tanya Waters. She didn’t think the summer camp massacre was real. She convinced her following that it wasn’t real. Her website was called “Tanya Dossier”. Tanya refused to take down the video although the video did help them identify the shooter as Kim. Kim snapped after her daughter died.

Kim was an alcoholic. She went back to drinking after her daughter died. She refused to go to her daughter’s funeral. After her husband was arrested for pointing a gun at someone, Kim started to watch Tanya Dossier. She became convinced that the government had taken her child.

The government was using her child in false flag operations and that she needed to go rescue her. Kim even contacted the shooter’s mom. She asked her what did she and her son do with her daughter except the other mother said she didn’t do anything to those children. The woman’s son was sick. He suffered mental problems. They brought in his therapist and he shot the therapist as well as his own father.

After that, he went to the nearby summer camp. He killed a bunch of kids and one adult before he was stopped. He was very troubled. His mother had nothing to do with what he did. Nor was she paid to tell the world her son killed children. Kim beat up this poor woman before she spotted a laptop and she escaped in the woman’s car with the laptop. Kim tried calling in to Tanya’s show, but Remy cut in. He tried to convince Kim that her daughter was dead and nothing he said got through to her. Kim took Penny’s laptop to someone else who bought the conspiracy. This person was Wolfgang. And he was Tanya’s son.

Wolfgang has been harassing the parents of the other dead children. They had apparently come together to sue Tanya for defamation. Wolfgang bought his mother’s lies and so he was harassing them until he met with Kim. They egged each other on. They became convinced that a billionaire that donated money towards the families was a payoff to claim their child died. Kim and Wolfgang found the billionaire’s address. They called Wolfgang’s mom before they got there because they wanted to tell her she was right and that’s when Tanya came clean. Tanya made it all up. There was no conspiracy. She was driving people to her page so that she could sell her makeup line.

But even after she heard the truth from the horse’s mouth, Kim still didn’t want to believe it. She tossed Wolfgang’s phone out of the car and they went to the billionaire’s home. They took him hostage along with his security guard. The FBI later arrived on the scene. They knocked out Wolfgang. They were able to talk down Kim and Kim later saw the things that her daughter had with her before she died. And Kim worshipped those things, but she still believed her daughter was alive and there was no convincing her differently.

Tanya’s media empire however was done. Her film crew had all turned against her. They even filmed her telling Wolfgang that she had made it all up and so the video of her telling the truth is what they put on the website.