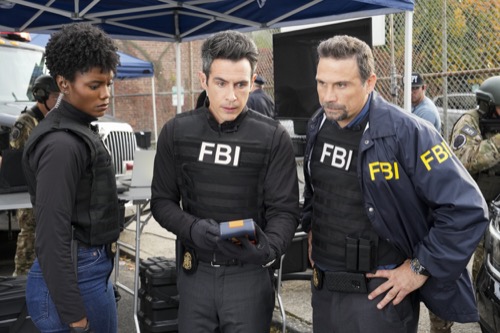 Tonight on CBS FBI  airs with an all-new Tuesday, January 10, 2023 season 5 episode 11, “Heroes,” and we have your FBI recap below. In tonight’s FBI season 5 episode 10 called, “Second Life,” as per the CBS synopsis, “The abduction of a young woman leads the team back to a cold case from 18 years ago, which pushes Isobel to reconnect with her old partner Jake (Tate Donovan) and take another shot at solving one of her first cases at the Bureau.”

In tonight’s FBI episode, FBI Analyst Kelly Moran was running late for work when he heard screaming. He may be an analysist but he was still one of the good guys and so he went towards the screaming rather than running away from it. He followed the noise to a bank. He went inside.

He asked a lady at the front desk if everything was alright and that’s when a guy in a mask pointed a gun at him. Kelly was taken hostage along with everyone else inside the bank. The two armed individuals had searched him for a cell phone. They never found his and they therefore didn’t know that he shot off a text message to Jubal about the bank situation.

The FBI as well as local NYPD were able to swarm on the location. They track the bank robbers inside. They tried to open up a communication with the robbers and the robbers were still set on what they came for. They didn’t try to rob a bank just to get some lose cash.

They went to that specific bank because they wanted something out of a safe deposit box. There was just one problem with gaining access. It was a biometric lock. Meaning they needed the person who owns the box to physically be there to access it. It was that or no dice. The bank robbers weren’t happy with that news and they tried to get the bank manager to call his boss to gain access to the deposit box.

Only Kelly was reporting everything that happened inside of that bank as it was occuring. The FBI also accessed the security cameras inside of the bank and so they were able to identify the bank robbers. They were Marco Salazar and his wife. He was the son of Raphael Salazar.

The father was the legal owner of that safe deposit box. He was the only one who could access it and yet Marco couldn’t use him. He couldn’t do so because Raphael was dead. The FBI went to Raphael’s home. They found him beaten to death on the floor. There was no telling if his son did that to him or if Marco was tied to something bigger.

Marco kept talking about running out time. He wasn’t concerned about the FBI or the police being outside. He and his wife needed access to that box in the next thirty minutes. They seemed almost scared about what would happen if they didn’t gain access and so they demanded a locksmith.

They wanted someone who could break into the deposit box around the security protocols. The FBI had a locksmith for the job, but they were maybe an hour away and that’s why they decided to go with a decoy. They couldn’t get a real locksmith and so they faked one. They had Jubal dress up as a locksmith before sending him into the bank.

They had Jubal buying time while they investigated what drove seemingly two good people into this. It turns out Raphael had secret security cameras. The cameras picked up that it wasn’t his family that killed him. It was two goons. Raphael was cleaning money for someone and then withdrew two hundred million dollars because he got greedy. The people he worked for had found out what he did. They tried to get him to talk. He told them that he converted the money in bitcoin. He said the access code was in his safe deposit box. But then he died. He had a heart attack and his employers still wanted the money and so they kidnapped Raphael’s granddaughter.

Marco and Jennifer were told to get that deposit box by a certain time or their daughter was dead. They could have gone to the FBI at that time and they chose not to. They instead tried to get the deposit box on their own. They took an entire bank hostage. They had Jubal working on the system and he wasn’t moving fast enough for them. Marco then tried to manually break into the deposit box when it triggered a safety protocol. It got locked for twenty-four hours and there was nothing they could do to get the deposit box in time. Jubal tried working on it. He had an earpiece in and Isobel told him to stall.

Jubal was trying to do so when Marco was getting rough with the bank manager. Jubal tried to step in and Marco hit him so hard that it knocked out his earpiece. Jennifer saw the earpiece. She alerted Marco. They figured out that Jubal was a cop. Or in his case an FBI Agent. Kelly texted his FBI friends that Jubal had been made. The FBI realized they had to move in because Marco and Jennifer were devolving. They had ended up shooting the bank manager after he tried to grab one of their guns. There was no getting access to the deposit box in time and the FBI were looking for their daughter. And that last part was the saddest thing about the situation.

If Marco and his wife had simply gone to the FBI when they learned their daughter was kidnapped – they could have gained access to the deposit box legally. They could have assisted with getting the little girl. The couple wouldn’t have had to terrorize a bunch of people much less shoot someone. But the couple didn’t ask for help with their daughter. They tried to handle it themselves and now they face years in prison meanwhile the feds started looking for the girl the moment they realized she had been taken. And they found her.

They found her alive. She was heavily sedated and so they couldn’t put her on the phone, but the parents were so worried that their daughter was dead that they threatened to kill people and so Kelly revealed he was an FBI Agent. He said he had the little girl on the phone. They moved in to talk to their daughter and that’s when the FBI breached the building. They were able to arrest Marco and Jennifer and Marco’s sister agreed to take custody of her niece.

And Kelly had such a rough day, but he showed Jubal that he could be brave and Jubal congratulated him after it was all done.