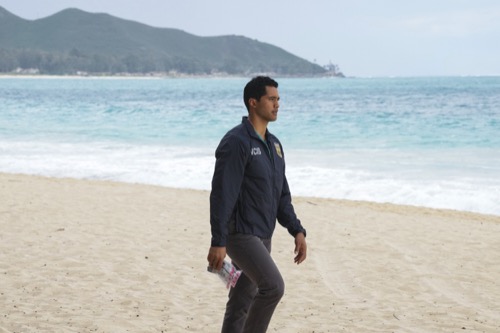 Tonight’s NCIS Hawaiʻi Recap begins now – Refresh the Page often to get the most current updates!

In tonight’s NCIS Hawaii episode, Tennant’s son was sick. He was so sick that Tennant had to compel him to stay home. He actually wanted to go to school because he had a big test scheduled and so Tennant had to talk him into staying home. He needed to hydrate. He also needed to rest.

Alex felt so horrible that he didn’t even argue with her. Which was a first for him. He chose to stay home without a fight and Tennant went off to work. Her team was investigating the mysterious death of Marine Willem Dennison. He was a hardcore soldier.

Willem was part of group of elite soldiers known as the Black Diamonds. He was also found with a gun on him. Although that wasn’t the murder weapon used to kill him. Willem was beaten and shot. It seemed odd that he wanted to go off alone only to run into trouble and so the leading theory was that he was in trouble before he went to that location.

He was probably meeting someone there. The trouble turned all too real and he was killed because he was in trouble. There was just one problem with that theory. There wasn’t anyone in Willem’s life who noticed anything wrong.

They all seemed to believe that Willem was acting normally. His group was doing well. They just had a successful mission and yet not long after returning stateside – people began dropping out of the group. It didn’t make sense this would happen after being so successful and so Tennant looked into former members who were willing to talk.

She found Sergeant Ellis Kane. He was known as Brother Ellis Kane now. He joined a monastery. He now tends to the bees. He’s made peace with his life and he claimed to wish nothing but the best for Willem.

Only the team learned some hot gossip. They learned that Willem and Ellis fought on Ellis’s last day. It got physical. Someone had to break up the fight. Ellis stormed off very angry and a couple of years later it was Willem who was found dead less than two miles away from the monastery. Tennant questioned Ellis about that. Ellis claimed he was in his room all night on the night Willem died. But that turned out to be a lie. They later found security footage of Ellis using a payphone a couple of miles away on the night in question.

The team were trying to figure out why Ellis would kill Willem when they got help. They got help from a fellow investigator. It turns out Ellis had claimed that a fellow member of the Black Diamonds had started a fire to kill people because they backtalked him. Those people died in the fire. The Black Diamonds were able to quickly act and rescue everyone else and the person that Ellis named got rewarded. It was Master Sergeant Justin Baxter. Now, the team talked to Baxter. He never mentioned anything about accusations and it did seem odd that Willem reached out to Ellis right before he died.

Did Willem have a change of heart? Back when the incident first happened, Ellis went to Willem telling him that he saw Baxter start the fire. Willem didn’t believe him. They got into a fight. Ellis left the group and joined a monastery. But he reached out to Ellis in the lead up to his death. Did he suddenly believe him about Baxter? Or did he come to suspect that Ellis sent the fire himself and blamed it all on Baxter? Tennant and her team suddenly had two suspects in Willem’s murder. They went back to the monastery to ask Ellis why he lied about his whereabouts when they ran into someone spying on Ellis.

They chased after the person. They lost him or her without ever seeing them properly. Except with the help of Sergeant Summer Westmore of CID, they were able to picture what really happened on that mission overseas. It turns out it wasn’t Ellis that witnessed Baxter start the fire. It was another Marine. Her name was Nadia. She was too scared to come forward and so Ellis did it for her. He pretended to be the witness. He later told Jesse that Willem didn’t believe him at first. Not until a few years pass by and he noticed something wasn’t adding up with Baxter and so he went to Baxter.

Willem wanted to give Baxter the chance to turn himself. But Baxter chose to kill Willem instead. He was also trying to cover up what he did by killing the only witness to talk and that witness was Ellis. It was Nadia. Baxter followed Ellis. He knew that Ellis was hiding Nadia because he’s been searching for Nadia ever since he killed their boss and when Ellis finally came clean about hiding Nadia and even bringing Jesse to see Nadia in person – they were followed. Baxter attacked the trio. They fought back. They were able to subdue Baxter and he was arrested. He will finally face justice for the things he did to people overseas.

And Ellis thanked Jesse for his help. He ran away from his problems when he joined the monastery and Jesse reminded him that some things are worth fighting for.

And Tennant returned to her sick son who was also nursing a broken heart.