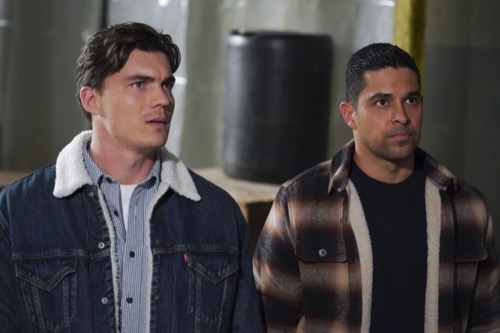 Tonight on CBS NCIS returns with an all-new Monday, January 23, 2023, season 20 episode 12 called, “Big Rig,” and we have your weekly NCIS recap below. In tonight’s NCIS season 20 episode 11, “Bridges” as per the CBS synopsis, “When an old pal of Torres’ comes to him – disheveled and bloodied – for guidance amidst an undercover FBI operation and then disappears, NCIS helps track him down. Also, McGee prepares to be a contestant on a popular game show.”

In tonight’s NCIS episode, an old frenemy of Torres’s approached one night outside of the diner. It was NCIS Special Agent Dale Sawyer. He and Torres used to always butt heads a lot. They looked for opportunities to fight with each and so it was surprising that Sawyer would reach out to him of all people.

Sawyer was pretty messed up that night. He was on edge. He was worried about his cover. He was doing an undercover op with the FBI. He was supposed to live as two different people and it was getting to him. He was cracking under the pressure when he approached Torres. Torres said that maybe he should be pulled from the assignment. And Sawyer said he’s done and seen too much to let the case collapse without him.

Sawyer told Torres to forget it. He left him outside of the diner and the whole thing didn’t sit right with Torres. Torres later tried to contact the FBI about it. They said only Sawyer’s handler knew where he was. Torres couldn’t get the handler’s information, but he took what he learned from that one conversation to investigate where Sawyer might be.

Sawyer mentioned the trains were keeping him up at night. Torres started investigating apartments near the train stations the next morning. He was looking into where Sawyer might be when they got a call about a body.

A body was found in the trunk of a burnt out car. It was near the train station. It was too burned up to be identifiable at first glance. Sawyer did look antsy when Torres last saw him and so Torres was worried it was Sawyer that was in the trunk. Only Jimmy performed an autopsy on the body. It wasn’t Sawyer. It was an FBI Agent. FBI Special Agent Greg Parlamis was undercover with Sawyer. They were posing as truckers. They went dark three weeks ago and their handler hasn’t heard anything from them. And then this happens.

The FBI were getting worried about them. They were figuring out what do when Parlamis’s body showed up and they naturally threw dirt on Sawyer. To them, the NCIS Agent had to be the reason why the op went bad. The FBI said Sawyer was either dead or he was hiding.

They especially started to point the blame when they heard that Sawyer reached out to Torres and might have blown his cover. Torres actually grew upset with the FBI were disregarding Sawyer’s safety. He told them it was their responsibility to keep those men safe and that they failed the job.

The FBI then reminded Torres that they didn’t want Sawyer originally. They first approached Torres. But Torres was early in his sobriety. He wanted to take time to focus on himself and so he passed. The FBI next offered for Sawyer. Only Sawyer accepted. Sawyer has a reputation for being smug and arrogant. Everyone assumed he took the offer because he wanted to prove how great it was at it and unfortunately it looks like something went wrong. The gun that was used on Palarmis was actually Sawyer’s service weapon.

The FBI believed Sawyer killed his partner because he gotten in over his head. NCIS thought differently. They looked into the case. Some truckers were believed to be involved in heists. There was one obvious suspect named Wade Cutler. Cutler called in sick every day of the heists. He likes to hang out at a known trucker bar called “Triple Deuce”. The bar was known for being loud and for having a mechanical bull that makes animal noises. The last time that Sawyer called his mom – she said she heard shouting and what sounded like a barn.

Torres went to the bar. He pretended to be a trucker. He butt heads with another trucker and got into a fight. Only Sawyer broke it up by pulling a gun on Torres. Torres was able to talk his way out of trouble. He even got to meet Cutler. He charmed him. He ended up successfully infiltrating Cutler’s crew, but it also gave him a chance to talk one on one to Sawyer. Sawyer did kill Palarmis. Palarmis was stealing money from Cutler. Sawyer found out about it and confronted him. And Palarmis went for his gun first.

Sawyer said he had to kill him. It was self-defense. He killed him and he told Cutler he killed him because Palarmis was actually a cop and a rat and so it was Cutler’s idea to burn the body like he did. Cutler wanted to send a message though the message ended up saying that Sawyer was in over his head. Sawyer went to go see Torres on the night he killed Palarmis. His head was all turned around. He just needed to talk to someone and that someone was Torres. Torres tried to pull Sawyer out of the op. It was Sawyer that refused.

Sawyer said it was personal. He found out Cutler’s crew was dealing in the same drugs that killed his sister and that’s why he wants to see the case through to finishing them, but someone recognized Torres as a cop. They then pointed a finger at Sawyer for vouching for Torres. And so the both of them were about to get killed when the rest of NCIS showed up and helped them arrest the whole crew.

Sawyer got to see through his case and it ultimately brought him closer to Torres.

And McGee was supposed to take part in a game show, but it got cancelled at the last minute while they open an investigation into another contestant on an impossible winning streak.