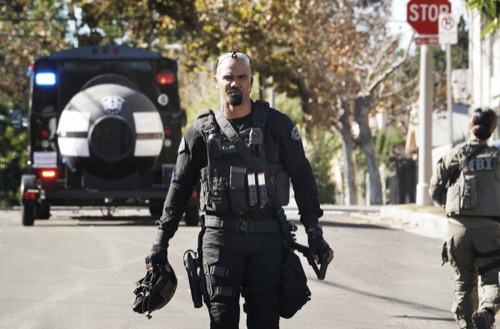 Tonight on CBS their new show S.W.A.T. inspired by the television series and feature film airs with an all-new Friday, January 20, 2023, episode, and we have your S.W.A.T. recap below. On tonight’s S.W.A.T. season 6 episode 11 called “Atonement,” as per the CBS synopsis, “The SWAT team participates in a joint task force with the FBI when a car bombing has ties to a terrorist group planning an attack in Los Angeles.

Also, a tragedy from Deacon’s past gives insight into the origins of his faith, and Luca and his brother, Terry (Ryan Hurst), battle over a new family revelation.”

So make sure to stop by tonight between 8 PM and 9 PM ET for our S.W.A.T. recap. While you wait for our recap make sure to check out all our television news, videos, recaps, spoilers, and more, here!

Tonight’s SWAT recap starts now – Refresh the Page often to get the most current updates!

In tonight’s S.W.A.T. episode, there was a car bombing in LA. Hondo and his team were called to the scene. They were told that there was a man in the car when it blew and that he was instantly killed. Everyone believed the poor man to be a refugee from Ukraine. He had just escaped the war over there by coming here and he was doing his best to start over when this happens. Hondo’s people weren’t the only ones called to the scene.

They ran into their old friend FBI Special Agent Vasquez. She said there’s been a lot of chatter on the dark web about Russian extremists threatening Ukrainian refugees. They said they were going to get them and so everyone assumed the car bomb was just the first part of a terrorist’s plan.

The refugee was identified as Borka Koslov. He was a farmer back in the Ukraine. He recently came to the United States with his wife and two adult sons and his family disappeared the moment they heard about the bombing. Everyone figured they were running.

They just didn’t know what from. They didn’t know if the family was afraid of further attacks or if the bombing had spooked them because they have enemies. SWAT went looking for the family. They contacted the priest that was helping them acclimate to the States.

Father Dorner was an old friend of Deacon’s. Deacon met the priest fifteen years ago after he got injured in a car accident that killed his friend. Back then, he was a very angry man. He hated God. He was set on destroying his life and so a lot has changed since then.

Deacon meeting his wife was also a big part of what saved him. Deacon and Father Dorner reconnected. The Father mentioned Koslov’s wife was good friends with another refugee named Oskana. SWAT later contacted Oskana and they asked her about the family. She said that it seemed like they were waiting for something to hit them.

Oskana came to the States because her own father thought it would be safer here than there. She said they didn’t want to live their lives in fear of the next shell coming through their roof and yet she felt the Koslov family were still acting as if the shell was going to come.

Oskana’s theory seemed true when Vasquez and Tan later caught up to Koslov’s wife. It turns out she wasn’t his wife. They weren’t even a family. They were Russian extremists who believed in recreating the USSR. They thought they were racially cleansing the world with terrorists attacks.

Koslov wasn’t even murdered. He accidentally blew himself up because he hit a speed bump. His bomb was that combustible. He and the others were part of a group known as the “Victory Force”. They were targeting refugees all over the world and they came to the United States because they blamed the Americans for aiding the Ukrainian resistance. The wife’s real name was Uma Petrova. They caught her trying to build another bomb because Koslov dying like he did set them back in their agenda.

Anyways, Uma was smug about being a terrorist. She said her comrades would continue without her and that the Americans couldn’t stop what they were planning. Hondo tried to reason with her. He said he’s seen war and war was never this cowardly to attack women and children. Uma didn’t seemed fazed by that. She called the Ukrainians a poison infecting the world. Uma was trying to destroy a hard drive before she got caught and on that hard drive they found a photo from the Ukranian consulate with Oskana on it.

Oskana was still at the station. They asked her if she was in on the plot and she denied it. Oskana really was Ukrainian. She was dating one of the sons. They were supposed to keep it secret because she was sixteen. She didn’t know that Dmitri was using her to build an alibi at the Ukrainian church in the city. Oskana signs with the choir and her supposed boyfriend showed up to every session because he told her he loves hearing her sing. And so once Oskana pointed them towards the church, SWAT was able to rapidly deploy to the location.

They cleared out the building. They trapped the two Russian terrorists inside with the bomb and being a martyr wasn’t part of their plan. They tried to fight their way out of the building, but one was shot and killed and the other was arrested. They also were able to defuse the bombing by correctly guessing the code. And that’s what the Russians get for bragging about Victory Day.

And Luca introduced his brother Terry to their half-sister, Eva. It seems Terry knew about Eva for the past three years. Eva’s mother tried coming to the house to tell their dad about Eva because she had just gotten diagnosed and she wanted to leave her daughter with family. And Terry’s parents weren’t at home that day and so he sent the older Durant woman away. He thought he was protecting their family. He didn’t want Eva to destroy his parents’ marriage and he blew up at Eva. He told her to go away. He said they didn’t need a sister and Luca spoke up for Eva.

Luca defended her so much that Terry tried to apologize, but Eva said the whole thing reminded her that she wasn’t really a part of the family and that maybe they should leave it that way.