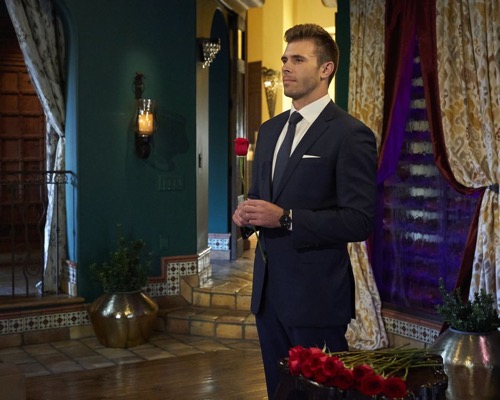 The Bachelor 2023 airs on ABC this evening with an all-new Monday, January 23, 2022, season 27 episode 1 premiere and we have your The Bachelor recap below. On tonight’s The Bachelor season 27 episode 1 as per the ABC synopsis, “Zach Shallcross’ Journey to find love begins! Thirty hopeful women arrive at the mansion looking for love and to make a lasting first impression with our newest leading man. The pressure is on and despite their best efforts, not all will come up roses.”

Tonight’s episode begins with the new hopeful women travelling by limo to meet their bachelor, Zach Shallcross. Theyall want Zach and the claws are going to come out. The champagne is on ice and the roses are ready.

Last season, Zach was looking for love and it didn’t work out. He still feels like this is a dream, he hopes to find his wife and he doesn’t want to mess round. His buddy, Sean drops by, the Bachelor worked for him, he is married ten years and has three kids. Sean says he wouldn’t have picked Catherine from the beginning, but mid-way through, he knew it was her, even though she wasn’t his type. Sean advises that for a long and healthy relationship that he find his best friend.

After it was announced that Zach was the bachelor he was introduced to five women, Brooklyn, Brianna, Bailey, Christine and Cat. America voted for which on of these women would get there first impression rose, and it was Brianna and she will be safe from elimination. Meanwhile, there are a whole lot more women on their way to meet and woo Zach.

Katherine is 26, she is a nurse. Christina Mandrell is 26, she is a Nashville native, her mother was part of the group, the Mandrell sisters and she has a 5-year old daughter. Charity is 26, she is a child and family therapist. Greer is 24, she is a medical sales rep. Brooklyn is 25 and the rodeo takes up so much of her life. Kaity is 27 and she an ER nurse.

The first woman walks out of the limo, it is Jess and she a 23 year old E-Commerce Coordinator. Ariel is a 28 year old Marketing Coordinator, she says she missed her flight but nothing was stopping her from being there. David is a 25 year old Marketing Manager, she brings champagne with her. Gabs is a 25 Account Executive and she brought him Vermont maple syrup from home.

Mercedes is 24 and she is a pig farmer, she has brought Henry the pig with her and he steels the show. A bus arrives, it looks like a party bus and Christina Mandrell gets out and she tells him that she is coming from a bachelorette party. Becca is 25 years old and she is a nursing student. Cara is 27 years old and she is a Corporate Recruiter. Brianna arrives with her rose that Zach gave her.

Zach gets another first impression rose tonight, besides the one that was given to Brianna, and he gets to give this one to anyone he wants to. Zach tells the women that he is just a dude that loves family, football and frozen pizza. He has two loving parents who are still together and he wants the same thing, a long lasting and honest relationship. Zach sits down to chat with Katherine first and he says there is definitely a spark there, something exciting.

Kaity has her turn to sit down with him and she goes in for a kiss and tells him that he is a good kisser, he says she is too. Christina brought questions, to see if they have things in common – she also goes in for a kiss, but it is a longer one. Madison and some women interrupt Christina and Zach on the party bus. The dancing begins and Christina is pouring champagne down Zach’s mouth.

Jesse brings in the first impression rose and things start get real for the women. Greer make a dash to speak with Zach and she tells him that her parents are still together, and so are her two sets of grandparents. And, she always wanted to settle down and have a life in Houston, although she is living in NY now. Zach leans in for a kiss and it becomes more than a kiss, the two are making out and the other women are in shock, watching from inside.

Madison then takes him to the side, she wants a kiss before the night is out and plans on getting it. She says she can see herself falling in love with him, he is so great, she wants to be in his arms and cuddling. She thinks the attraction is electric, but he didn’t go in for a kiss. Zach is with Brooklyn, and Madison goes back in for a second round, she wants that kiss. He gives it to her, but it wasn’t much and she wishes it was more. It was sub par according to her, like a peck. Zach says the kiss didn’t feel right and he is overwhelmed with her.

Madison loses it, she felt not wanted and says she gave up so much to be there. Kimberly tells her to keep her head held up high. Then, more girls are crying because they don’t get to have time with Zach.

Charity is with Zach and they bond over her being a therapist for children with trauma and his mother being a special needs teacher. Zach asks her if he can kiss her, and it is another hot one.

Jess finally has time to speak to Zach and they are adorable together, they think each other are cute and it is another make out session.

At this point, Madison is hysterically crying, she thought she was getting the first impression rose. Other women are disappointed, but they are not hysterical like Madison. Jesse walks in and says the cocktail party is over. Zach is talking to Jesse when Madison interrupts to speak to Zach.

Madison asks Zach if he wants her on this journey, and being the honest guy that he is, he tells her no, there wasn’t a spark and he is sorry about that, but thanks her for coming to meet him. Madison walks away and starts crying, poor Zach is just standing there and feeling like a heel. When she gets in the limo she says she can’t believe she gave up her life for him.

Jesse returns and tells the women who did not receive a rose to say their goodbyes.