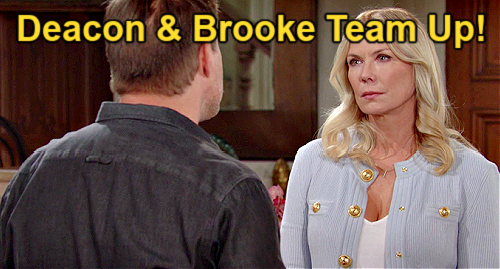 The Bold and the Beautiful (B&B) spoilers tease that Deacon Sharpe (Sean Kanan) could play a crucial role in Sheila Carter’s (Kimberlin Brown) takedown. Deacon currently has a soft spot for Sheila, but that could change once she inevitably goes off the rails again.

After Deacon gets updates from Hope Spencer (Annika Noelle), he may see that Sheila is already causing a ton of turmoil.

Sheila is bad news and will only do major damage to the people around.

Deacon struggled with the trauma of seeing wounded Steffy Forrester (Jacqueline MacInnes Wood) and John “Finn” Finnegan (Tanner Novlan) in the alley that night, so those memories could come back to haunt him.

Once Deacon learns Bill Spencer (Don Diamont) blackmailed Finn and Steffy so they wouldn’t testify, that could leave him somewhat torn.

Although Deacon will initially be a little impressed by Sheila’s clever Bill alliance, he could shift his way of thinking eventually.

If Sheila does something to seriously endanger Hope, Brooke Logan (Katherine Kelly Lang) or anyone they care about, it could spark a change in Deacon.

There may come a point when Deacon sees that he was wrong to drop his guard and become fond of Sheila.

No one knows Deacon hid fugitive Sheila for months, so that seems like a loose story end that needs to be tied up.

Why leave drama on the table? The writers still have a chance to blow the lid off that secret, so they need to pull the trigger.

It’d be as easy as Hope remembering “Lina” and putting the disguise puzzle pieces together.

Hope would be deeply disappointed in Deacon, but maybe he could score a chance to redeem himself.

If Brooke and Hope find out Deacon formed a legitimate steamy connection with Sheila, they might hope to use him as a secret weapon.

If anyone can seduce Sheila away from Bill, it’s Deacon!

The goal might be getting Sheila to cheat and showing Bill that she’s not the loyal woman she claims to be.

Perhaps Brooke could team up with Deacon on a plot and help prove Sheila’s willing to stray from Bill’s bed.

It’d be easy to get some sizzling video proof and finally turn Bill against Sheila for good.

If Sheila dares to betray Bill – especially with an enemy like Deacon – it could snap Bill out of this devoted trance and convince him to fight back.

Could Deacon land at the center of a Sheila seduction scheme? Will Brooke and Hope need Deacon’s help in the end?

The Bold and the Beautiful spoilers say Deacon’s secret needs to come out, but he also deserves an opportunity for redemption!

CDL will have other great Bold and the Beautiful spoilers, updates and news, so make us your favorite B&B hotspot.