The Young and the Restless Spoilers: Jack Goes To Jail? – Jeremy’s Revenge Looms 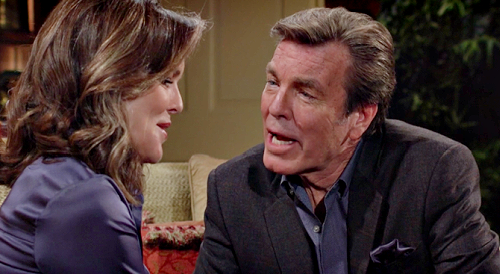 Nikki Newman’s (Melody Thomas Scott) necklace was said to be worth seven figures.

But why would Jeremy, who was just earned an early release from jail, personally rob Victor Newman’s (Eric Braeden) wife?

Chance Chancellor (Conner Floyd) asked that question and many others when he stopped by the Abbott mansion.

Jack and Diane put on a half-baked act, believing their frame will stick.

Young And The Restless Spoilers – Jeremy Stark Allows Himself To Be Set Up?

Jeremy was involved in money laundering. But his involvement with Diane, when she was calling herself Taylor Jensen, did not imply a high level of intelligence.

Hyde’s character was arrested and imprisoned for years. So, it is not far-fetched to believe he would fall victim to Diane again.

Jeremy was not sure if he trusted Diane or not. But his attempts to revisit a romance with her seemed to stretch reality. However, soap fans suspend disbelief as long as a satisfying plot outcome results, even if it takes time.

Young And The Restless Spoilers – Diane Jenkins Gets Her Man

The sight of Jack kissing Diane after Chance left the mansion was sobering for many. Walters’ character has few fans in Genoa City, Wisconsin. She is also hard to root for on the other side of the screen due to her evergreen manipulative nature.

Diane decided she wanted her life back. So, she used the information Tucker McCall (Trevor St. John) provided about Allie Nguyen (Kelsey Wang) and turned that into announcing her comeback to Jack in person.

The Los Angeles, California, shocker, that took place in the late Keemo Volien Abbott Nguyen’s (Philip Moon) home hit Jack hard. Phyllis Summers (Michelle Stafford) stood by Jack at that point in the plot but was soon forced out of his life by Diane’s return.

Jack could land in jail if Jeremy can prove he was framed. But Chance has a penchant for solving crimes, as the fans learned when he cleared his late partner’s (Rey Rosales, played by Jordi Vilasuso) cold cases.

Diane will shed her normal tears and lament Jack’s plight. But Bergman’s character is positioned to take the fall unless Diane is exposed as his accomplice on Y&R.