Who has the better arms – Sarah Jessica Parker or Madonna? 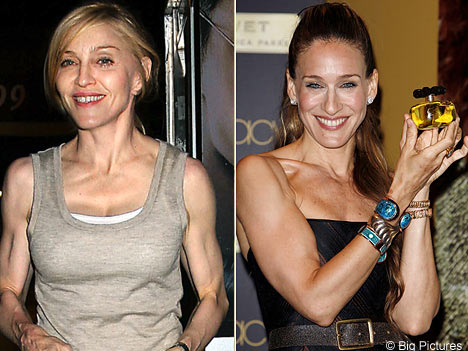 Haven’t we sinew somewhere before?? Biceps bulging and triceps tautened, Sarah Jessica Parker seems determined to muscle in on Madonna’s territory.?? In a strapless black dress teamed with a belt and matching dark shoes, Miss Parker, launching her latest perfume in New York, showed off a pumped-up physique that could only have come from hours in the gym.

At 42, she is a few years behind Madonna, the 48-year-old mistress of discipline who exercises for three hours a day and works as hard on her figure as her singing career.?? Of course, one explanation for SJP’s fiercely toned body could be that the diminutive mother-of-one is desperately trying to get in to shape for the hugely anticipated Sex and the City film.?? Insiders have said that negotiations with the series’ four leading ladies, Kim Cattrall, Kristin Davis and Cynthia Nixon are in full swing to adapt the hit show for the big screen.

“As a former dancer, Sarah Jessica has always been slim and toned,” said an onlooker. “But she definitely looks as though she’s been stepping it up a gear or two in the gym of late.?? “She did not have an ounce of fat on her and her arms, in particular, where exceptionally honed. She has the kind of physique that an athlete in their twenties would be proud of.”? Source?