Susan Sarandon on the July Cover of Woman & Home 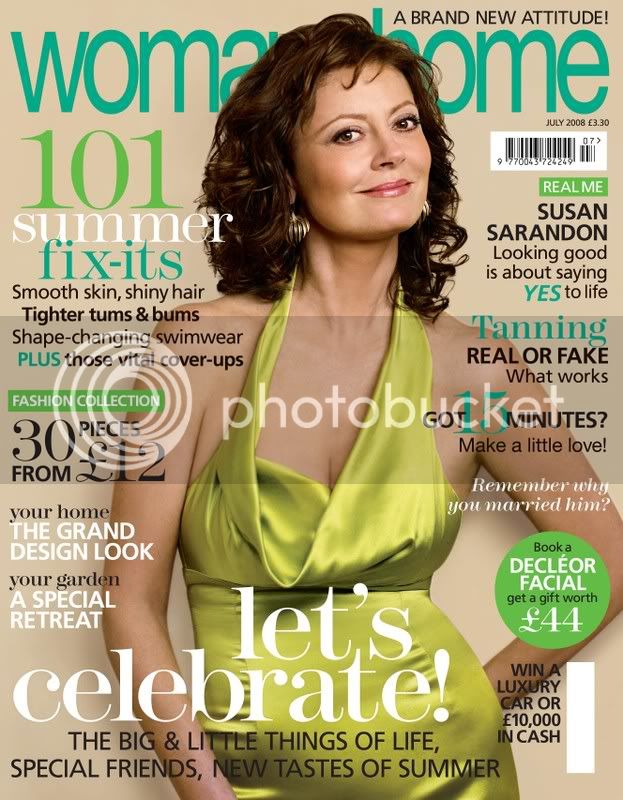 Below part of the interview with Susan in the July issue of Women & Home.  Susan Sarandon is on the cover for the latest issue of Woman & Home (July issue). Inside she talks about acting, beauty and men.

On acting: “I fell into acting. My husband, Chris, was an actor and I was the wifey, but I started doing some modelling and his agent sent me on an audition for a film called Joe. I got the part and it ended up being a breakthrough movie. The next thing I got was a soap, then another film – I thought it was a riot. It was a number of years before I thought, “I guess I’m an actor””.

On her role in Enchanted: “I was honoured to play an iconic Disney figure in Enchanted. I love that the princess is plucky and saves the prince. I love my character, Queen Narissa. It’s so much fun to be evil. She has no compassion – she’s completely over the top and imbalanced – it’s fabulous!”

On her new film: “I am also excited about my next film, The Lovely Bones [released in March 2009]. I love the book and it’s my first time playing a grandmother. She’s a great life force in the story, a completely insensible alcoholic with a great sense of humour. It was fun and, of course, so interesting to work with Peter Jackson.”

On beauty: “I haven’t had any work done to my face. I’d be lying if I said losing my jaw line was a pleasant thing and I am not ruling out eventually doing something. But I do think the plastic surgery thing can get addictive and extreme. I think looking good and being sexy is a state of mind. It’s about saying “yes” to life. There are lots of women my age and older who are living very vital lives. By the time my daughter is 60 and looks fabulous, it’ll be great if no one is making a fuss about it. How fantastic when it’s accepted that you can look good at any age.”

On men: “There’s nothing that turns me on more than a smart guy with a sense of humour and a little bit of a twinkle in his eye. I like men who cry and who listen, and who have a strong feminine side. I also like a man who can take care of things for me. I don’t care what age a man is, if he’s older or younger – it doesn’t matter to me. I like someone who can dance and laugh, and has a sense of adventure and who’s good at what he does. Passionate.”  Source