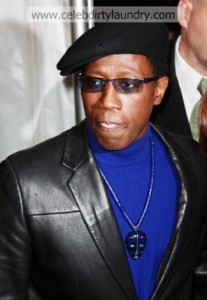 What is freedom worth?   Or a better question…  what is freedom worth to Wesley Snipes?   When Wesley was not filing taxes for years and avoiding paying his rightful and legal share of his massive income back to society what was he thinking?  Was he thinking that he was above the law – too good to pay taxes?  Did he imagine that with all the millions going his way that the IRS would forget about him?  He claims he had bad advice from lawyers and accountants but since he didn’t even bother to file his tax returns he had to know that something was wrong – that he was breaking the law, didn’t he?

If Wesley had known that he greed would cost him 3 years of his freedom would he have cheated on his taxes anyway?  I bet not.  I bet that if he could buy his way out of jail now he would – making money is not difficult for Wesley but getting back the 3 years he is slated to serve in the pen is impossible to regain.  He will eat jail food, go to bed on a hard small cot, get a menial job which he has to do, be told when to eat, sleep, wash, etc.  A complete loss of his humanity and rights for 3 years.

The government foes not take kindly to being robbed and tax evasion is robbery.  When we participate in the economy and earn money we agree implicitly to abide by the redistribution system fueled by the taxation system.  We do have the right not to work and not to earn money and therefore pay no income tax but we do not have the right to use the great American market system with all its legal protections and infrastructure provided by the government and financed mostly by tax revenue and not pay tax.  So when a big star makes millions note that they are only able to do this because of the social and economic system provided for them – and this great system would not exist without funding through the taxation system.  That is why a big star truly owes a serious chunk of their huge income back to society in the form of taxes.