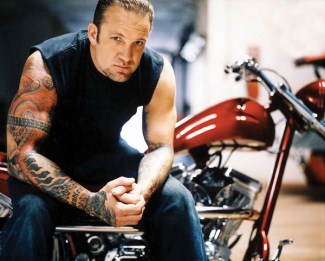 A magazine owned by Jesse James is being punished by an advertiser who’s upset at Jesse’s infidelity — and claims he doesn’t want his product to be affiliated with "someone like him." A man named D.A. Sebasstian was in negotiations to run an ad for his movie, "Rat Rod Rockers!" in Jesse’s Garage Magazine earlier this year — but pulled the plug right when he first learned that Jesse had cheated on Sandra Bullock … because D.A. didn’t feel that it was in his best interest to support a person like Jesse.

Sebasstian, a married father of two says "Think of all those kids who were fans of his show, ‘Monster Garage.’ What do you tell them now — when they had looked up to this guy as a seriously cool role model?" Jesse put the building that houses Garage Magazine up for sale last week. Coincidence?

Why is Jesse James getting off so much easier than Tiger Woods for what appears to be a similar set of ‘crimes?’ I asked my wife this question and she said its because Tiger had many more mistresses including at least one while Elin was pregnant and giving birth. She also said that as the story broke Tiger Woods showed a complete lack of emotional response and obviously was unconcerned apart from the effect the scandal had on his earnings and endorsements. Wood’s stellar performance at Masters after a long layoff adds evidence to the concept that he is a heartless scoundrel incapable of real emotions, in fact a sociopath, who married Elin only for show. Jesse James on the other hand is simply a classless bum who drives the trailer right into trailer trash.