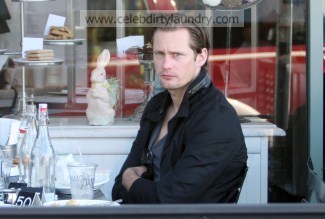 The ‘True Blood’ actor was enjoying the Californian music event with rumoured girlfriend Kate Bosworth when he became infuriated with snappers who were continuously taking shots of the pair.

Officers eventually intervened to stop the 33-year-old star from lashing out.   The altercation was quickly resolved and no arrests were made.  The incident was not the only thing to affect the pair, with 27-year-old Kate – who had earlier been seen sitting on Alexander’s shoulders in the crowd – getting upset with a female festivalgoer who approached hunky Alexander and “groped” him.
A source told the Daily Mirror newspaper: "It wasn’t pretty. Kate had been having such a good time, and then the girl grabbed Alexander. She was not best pleased at all."

Alexander and Kate have been romantically linked since last September but despite being photographed together several times, have repeatedly denied they are dating.  However, Kate recently admitted she “adores” the star, though will only admit they are "very good friends".   When asked about their relationship status, she said:

"That’s a minefield, man! I’m not stepping into that. I’ve learned too well from being on that road.   "We are very good friends, He’s a wonderful, wonderful man. I adore him."