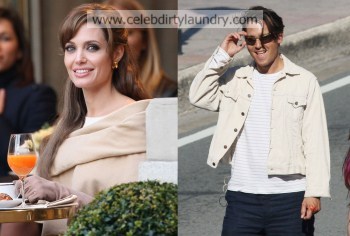 All eyes are on the set of The Tourist in Paris, France, where the world’s sexiest actors Angelina Jolie and Johnny Depp will collide and create a media frenzy of explosive proportions.   However, it won’t just be the star power causing fireworks but the looming shadow of scandal and supposed infidelity between the pulchritudinous pair.

Despite each having wonderful partners and children, some media outlets have envisioned an inevitable love connection that started the moment the two signed on to the film.   Ongoing rumors of marital strife between Angelina and Brad and Pitt’s recent rugged and ragged appearance have tabloids pushing for a catalyst for Angelina to end their relationship.   Depp has been very private about his love life to French singer/actress Vanessa Paradis but sources claim that femme fatale Jolie’s fierce sensuality will leave Depp mad with lust and ready to leave his gap-toothed gal.  What do you think?   Will Johnny be tempted by Angelina?  Will Angelina be tempted by Johnny?  Photo: Fame Pictures