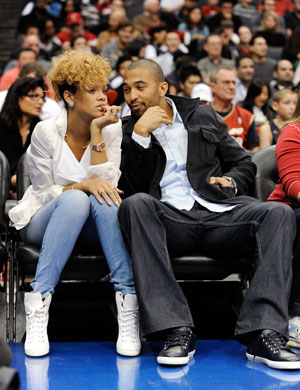 The ‘Russian Roulette’ singer – who has been single since splitting from Chris Brown after he assaulted her last February – was romantically linked with baseball star Matt Kemp after they holidayed in Mexico together last month, but the sportsman insists he is too focused on his career for romance.   He said: "Rihanna is just a friend, a good friend of mine. We went down to Mexico and had fun together.  “My job is to get my work in, which I’ve been doing. Nothing distracts me from my job, not the contract, or my personal life. When it’s time to play baseball, that’s my job. No distractions."

Despite his comments, the 25 -year-old Los Angeles’ Dodgers star admits he was surprised by the attention his holiday with the 21-year-old singer received but is resigned to their friendship being the subject of scrutiny.   He added in an interview on his team’s website: "I didn’t think all that would come out of it, it just happened. I’m not used to that much attention to my personal life. It’s really not that big a deal. But in Los Angeles, doing things here, you’re under a microscope, they’re examining everything you’re doing. It is what it is. Can’t control what happens."