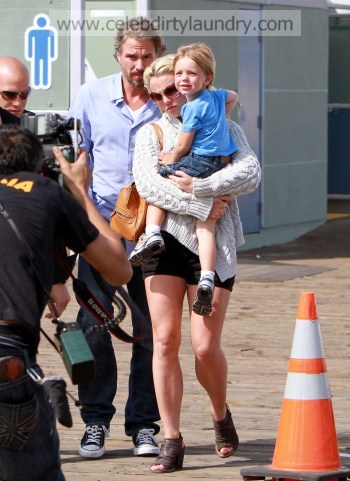 Britney Spears – who has two sons, Sean Preston, four, and three-year-old Jayden James, with her ex-husband Kevin Federline – has been accused by her former bodyguard Fernando Flores of being an unfit mother, beating one of the tots with a belt and giving them both foods they were allergic to.   A source told The Sun newspaper: "Britney doesn’t mean to be a bad mother. But Flores feels she has so many issues she can’t be trusted around her boys.   "He claims the first really shocking incident was when she came marching into the pool house at her mansion and demanded his belt.   "He handed it over but then followed her into the main house and claims he witnessed the alleged incident."

Britney, 28, strongly denies claims she mistreated her young boys in late March or early April.   They currently split their time between her home in Beverly Hills, California, and their father Kevin’s house.   Child protection agency workers apparently tried to question her about the allegations last week, but Britney had already left her home to spend a few days in Los Angeles.   Former policeman Fernando, 29, recently quit his job as the pop star’s minder, after accusing Britney of sexually harassing him by continually walking around naked in his presence.   A friend of his said: "Working for Britney is tough. She’s a nightmare to deal with and her emotions are totally out of control. She runs round the house naked and yelling at staff."