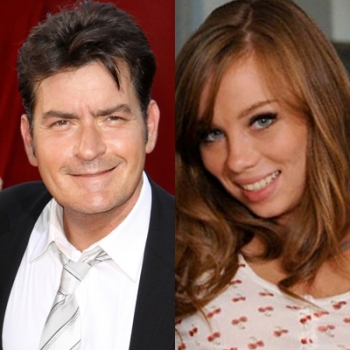 Capri Anderson has told ABC News the truth about lowlife druggie Charlie Sheen.  After hiring the prostitute/escort for a dinner date that wound up back in his hotel room – no doubt for some extra dollar considerations on the part of whoremaster Sheen, he started getting coked up and crazy!   He started yelling racial slurs – worse ones than Mel Gibson in known for apparently, and then started to strangle his date!  Boy, that Charlie sure is a fun guy – eventually Capri got away from the lunatic and locked herself in the bathroom.  When the cops arrived Sheen was naked and yelling the N-word repeatedly.

More: Two And A Half Men’s Ratings Soar After Charlie Sheen’s Drunken Binge

Radaronline reports: Towards the latter half of the night, it got really bad,” Anderson said.  “He started yelling racial slurs.  But it wasn’t until he put his hands around my neck that I really thought to myself, you have gotten yourself in a bad, bad situation.   He was going crazy and shouting ‘n**ger, n**ger, n**ger’ for no reason at all.”

The racist stoner was released within hours – of course – another example of celebrity justice – and tossed the whole incident off to “one bad night.”    Capri says “it isn’t right to hurt people.”

It is a sad comment on Hollywood Icon Sheen when his prostitute is a better person with higher standards than is he.  We do not like Charlie.