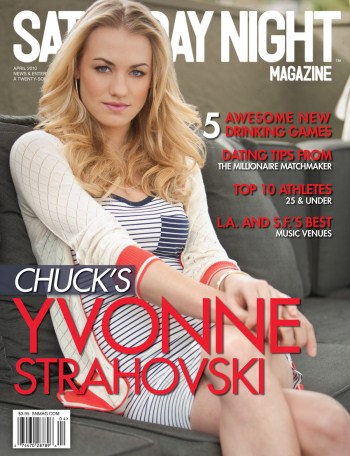 As sexy spy Sarah Walker on NBC’s hit series Chuck (Monday, 8 p.m.), Yvonne Strahovski knows a thing or two about keeping her real life a mystery. After all, the 5’ 9” beauty is actually from Australia (and of Polish descent), which she covers with a well-executed American accent on the show. As her infectious laugh rings out on our shoot at West Hollywood’s Chamberlain Hotel, you also might not know that she spends most of her time shooting late into the night, rarely finding a moment for some well-deserved downtime. Still, she refuses to disappoint the show’s many loyal fans who return week after week desperate to find out what will happen between Sarah and Chuck. So what does the new season have in store? Strahovski took a break from filming to clue Saturday Night Magazine in.

SNMag: Why were you first drawn to Chuck and the character of Sarah?
Yvonne Strahovski: What drew me in the beginning is that it was such a fun little mix of comedy and action. It caught my attention because there’s nothing really like this on TV right now. I feel really lucky to be playing a character like Sarah. She gets to be part of the funny role and the dramatic romantic role, and she’s also a kick ass spy. Initially, when I read it she came off as a very strong, intelligent woman, and it’s great to play somebody like that.

SNMag: As an Australian, is it difficult to always have do an American accent for the show?
YS: Australia is saturated with American culture with the television shows that we have down there. Living here, I’m surrounded by it. I never hear Australian accents so it’s easy for me to go into the American accent, the rhythm of it. It’s kind of second nature now. Now, when I read scripts, I read it in an American accent.

SNMag: How do you manage the physical demands of the role? Do you do all the stunts yourself?
YS: I like to do the stunts. It’s one of my favorite parts of the show. I grew up pretty athletic and was always sort of a tomboy. I was a dancer as well, so to me it’s kind of like learning a dance routine. We get to do some pretty cool stuff, and I do have to maintain a certain level of fitness. I’ll hike and try to do some exercise here and there when I have time and we’re not shooting so many hours a week.

SNMag: What’s coolest stunt you’ve gotten to do yourself?
YS: There’s a fight scene coming up that we haven’t done yet and it’s going to be one of my favorite fight scenes. The other stunt that I did was jumping off that clock tower in an earlier episode of the season where we sort of ziplined down a power line. That was really cool.

To read the rest of the interview visit Saturday Night Magazine.