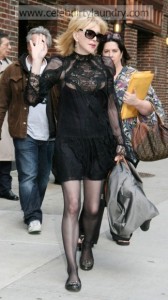 Bat shit crazy Courtney Love – who has a 17-year-old daughter Frances Bean with her late husband, Nirvana frontman Kurt Cobain – admits she was advised to tone down her appearance for the sake of her love life and so deemed it necessary to remove her false locks.  hmmm and why exactly didn’t the person advise her to stop all the crazy talk as well?

She said: “Someone from the designer Karl Lagerfeld’s camp told me that some of the front-row ladies wearing all the kooky stuff don’t get laid.  She said that if you want to get laid once in a while, then you better stop wearing the kook. I realised she was right.   “The whole time I had hair extensions, I was dry as a bone. Sex is like a good meal and fine wine. It has to be done.”

The 46-year-old rocker – who has a history of drug addiction problems – also admitted she advises her friends on the best rehabilitation clinics to enter for treatment.  Speaking about an evening with the late designer Alexander McQueen, she told WWD: “We were at a dinner party, and it was a discussion at the table about the best rehabs in America. We talked about the Promises clinic.  “If you want to know which rehab to go to, ask me. I’m the Conde Nast Traveller guide to rehabs.”