David Beckham In Court Battle With In Touch Weekly 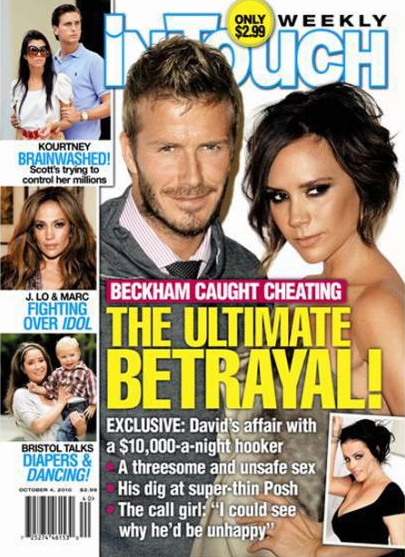 David Beckham was accused of having many dates with many women secretly so that Posh Spice wife Victoria remained in the dark.  The magazine publisher, German billionaire businessman Heinz Bauerwhich, filed these and other court papers in his defence against a $25,000,000 libel suit Beckham has brought against Heinz and In Touch, edited by Michelle Lee.

In the court papers Beckham is suspected of carrying on an affair with a Los Angeles-based lingerie saleswoman who he would secretly meet at the Figueroa Hotel near Staples Center after LA Lakers basketball games.

More: David Beckham Cheated On Victoria With A Hooker!

In addition at least three sets of independent sources — including “an acquaintance of Beckham” — detailed his strange behavior at two different hotels, at which he “appeared to be spending time with women who were not his wife”.  Furthermore, a source told In Touch how the lingerie store worker showed friends text messages she received from Beckham and that In Touch “continued to believe that Beckham did have a relationship with this lingerie saleswoman” even though he and the woman had denied it.

More: Crazy Husband Tries To Run David Beckham Down For Having An Affair With His Wife

But wait, there is more!  Beckham’s nanny saw “suggestive text messages” implying that he had an affair with Shery Shabani, the Beverly Hills mother whose children go to the same posh private school as Beckham’s three boys.

And this is the best – In Touch printed sensational claims that he romped with a Bosnian hooker who he is also suing!  She is prostitute Imra Nici, 26, who peddled the story that she slept with him for $10,000 cash in London and New York in 2007.

Beckham is at the denial stage in all this and the suing is probably a pathetic attempt to quiet his accusers – it won’t at all – and where there is this much smoke there is bound to be a fire or two!