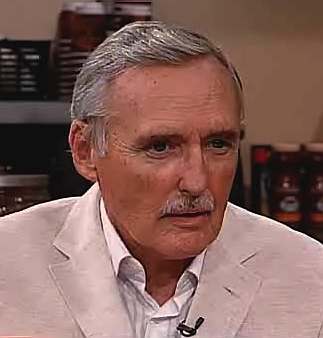 The 73-year-old actor – who is suffering from prostate cancer – filed for divorce last month and has now been granted a restraining order keeping estranged spouse Victoria, 42, at least 15 yards away from him at all times as she has “repeatedly subjected him to severe emotional distress".

A declaration made by the star’s doctor, Dr. David Argus read: "The presence of his estranged wife is hampering Mr. Hopper’s present cancer care.   "It is my belief and recommendation that the less Mr. Hopper has to do with his estranged wife at this time, the more likely he is to have his life extended."   Victoria has claimed Dennis is acting according to the wishes of his older children from a previous marriage who want her cut out of his will.   However, in their declarations, Dennis and his doctor insist he is of sound mind.

According to documents obtained by gossip website TMZ, Dennis’ declaration adds that his wife’s mother “told me in November of 2009 that I should simply leave the bulk of my property to Victoria as I was going to die soon. I found this statement distressing, inappropriate, bizarre and disturbing”.   A court granted Dennis the restraining order yesterday (11.02.10), and also gave the actor daily visitation rights between 5-7pm with Galen, his six-year-old daughter with Victoria.   It is believed the pre-nuptial agreement signed by the couple states Victoria must leave Dennis’ compound, where she currently resides, within 60 days after divorce papers are filed – meaning she would have to leave by March 11.