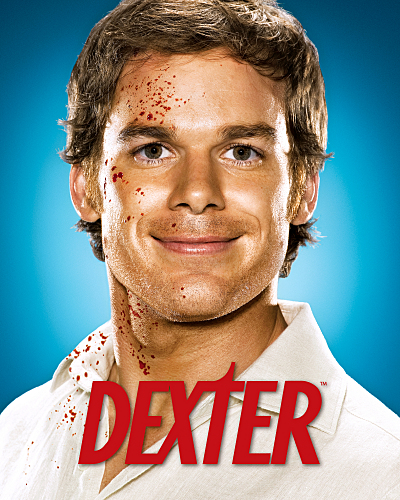 Of course we are referring to Dexter Morgan, that lovable if somewhat psychotic serial killer played so brilliantly by Michael C. Hall on Showtime’s hit series, Dexter.

On a regular basis, almost on every show, Dexter captures, renders helpless, threatens and then kills some victim – followed of course by a neat disposal of the body. What makes this even crazier is that Dexter is a blood-spatter analyst working for the Miami Police, where his adoptive sister (and real-life wife) Debra Morgan (Jennifer Carpenter) works as an amazingly funny foul-mouthed detective.

We learn each season and are reminded often, that Dexter’s dad Harry Morgan (James Remar) knew his adopted son was a serial killer and helped channel this uncontrollable urge of Dexter’s to a healthier expression, so to speak. You see herein lies the secret as to why the show works so well – Dexter (and his brother, who he has to kill in an earlier season) were trapped in a bloody cargo container for days with his brutally murdered mother, who happened to be his Dad’s girlfriend (Dexter really is the son of Harry after all) and a confidential informant.

This harrowing experience is what has turned Dexter into a serial killer – so we understand and accept this, but it gets even better.  You see, Dexter is no ordinary serial killer murdering innocent people, he only targets other serial killers and really hardened criminals who somehow escape the criminal justice they deserve. So now it becomes clear, Dexter is a vigilante ridding society of its absolutely worst elements.   Of course we love him, that darling murderer!