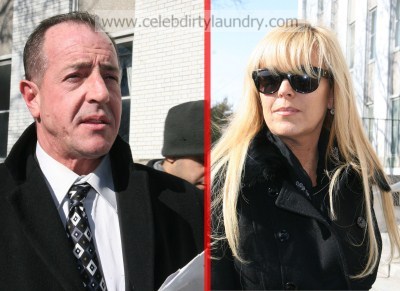 Dina Lohan is furious with Michael Lohan’s attempts to stage an intervention to “rescue” their daughter Lindsay, who he is convinced is addicted to prescription drugs, and insists he needs to leave her alone.   Dina fumed:

“He is dangerous. He has absolutely no rights to do this! He’s a three-time felon.   “I’m in shock right now. I can’t really speak. I’m petrified for my girls and their safety.   "I’m just trying to get to the bottom of all this. My girls are so afraid of him, I’ve had an order of protection place since 2005 and it stands until 2011. Ali is out there visiting. They are so afraid for their lives. My ex-husband is dangerous."

Yesterday (22.04.10), Michael flew to Los Angeles and went to Lindsay’s apartment building in Hollywood accompanied by four plain clothes police officers in an attempt to make her face up to her alleged drug problems.   He is adamant he acted out of concern for Lindsay, 23, and her 16-year-old sister Ali – who she lives with – and is planning to consult lawyers about obtaining a conservatorship order to give him control of the ‘Mean Girls’ star’s affairs.   Michael – who has been jailed three times for criminal contempt of court in 1990, a probation violation in 1997 and attempted assault and driving under the influence in 2005 – said:

However, Los Angeles County Sheriff’s department insist they found no cause for concern.   A spokesperson said: "We were there. We found no evidence of abuse."   Meanwhile, Lindsay’s ‘Mean Girls’ co-star Amanda Seyfried has spoken out in defence of the actress, insisting there is nothing out of the ordinary about her behaviour.   She said: "I think it’s just growth. People can fall out of line and fall back into it. I think it just takes some time.   "Clearly, people go through things and they deal with them differently. You’ve just got to be positive about it."  Photo: Fame Pictures