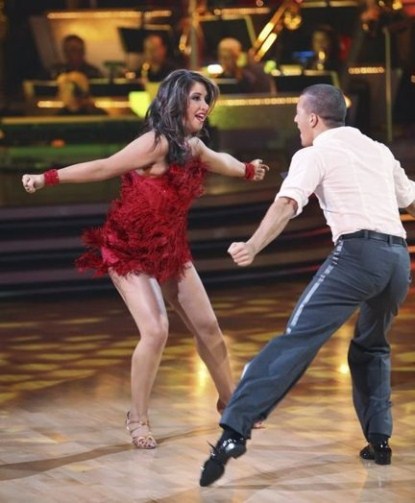 It seems like the whole world Celebrity Dirty Laundry included has been asking the $64,000 question.  How the hell did Bristol Palin make it to the finals of Dancing With The Stars?    Now a producer for DWTS, Conrad Greene has responded to the controvery and says Bristol actually deserves to be in the finals.  Maybe he is seeing something the rest of the world is not.

“She deserves it,” DWTS executive producer Conrad Green tells PEOPLE. “And a significant portion of our viewing audience believes that, too.”   “There’s nothing in the voting system that looks at all strange.”

Bristol has consistently scored lower that contestants who went home before her.  No one can argue Bristol has improved but her dancing is not in the same league as the remaining contestants or several who already went home.  Brisol consistently misses the mark, forgets steps and just pauses looking confused several times during the dances.

There are several websites that are organizing “Operation Bristol” campaigns and actualy explain to people how to cheat and get Bristol more votes.  Green still maintains despite all the proof cheating is impossible.

“An organized conspiracy? I sincerely doubt that,The Tea Party’s not that organized!”

Not sure where he is looking  but he needs to look around more they these Operation Bristol sites are  extremely organized.  The reponse by Conrad Green smells like bull – it is nothing more than damage control.