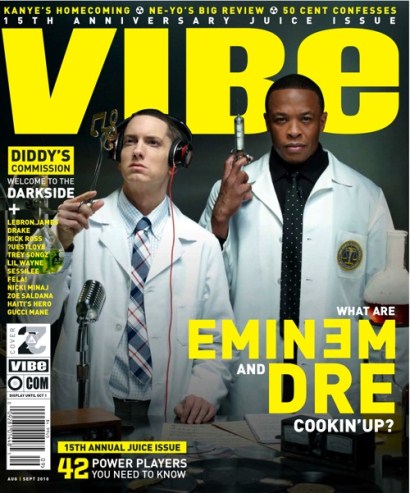 Eminem & Dr. Dre are on the cover of August/September 2010 Vibe Magazine.  The cover story was written by Thomas Golianopoulos and titled “Dying To Live.”   In the interview he talks about death, on Brittney Murphy’s death and being a celebrity.

Below is an excerpt from the cover story:

On Being Haunted By Death

The best Eminem Diss Track According To Em

What was the best thing someone said about you? Was there ever a hot Eminem diss?
Um, no. [Laughs.] Nah, I’m kidding. Shit, there was a couple of lines Everlast said like, “You ain’t running up on me with no empty gun.” I know that there is a lot of shit that I would have said about me.

It sounded like a Sally Struthers commercial. “Please give to this charity.”
Right. But they are. And it’s one of those things man where you’re famous, doctors will kiss your ass because they love the celebrity. “Oh, I can call up Eminem and get him on the phone right now. Oh, hi Marshall, how are you doing? Do you need that [prescription]?” There are doctors that will give you certain things just because of who you are.