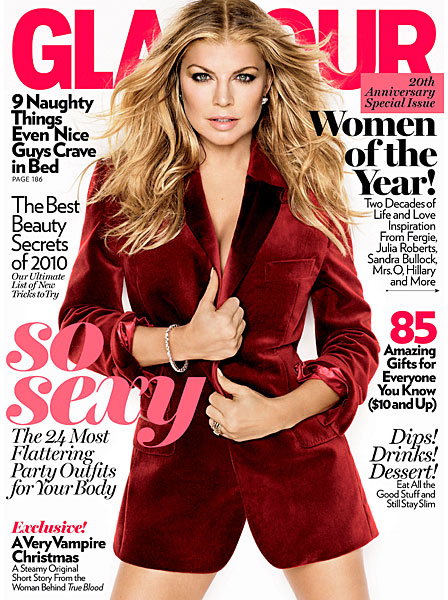 Glamour’s December 2010 issue is celebrating the 20th anniversary of Glamour’s Women of the Year Awards, and they are honoring a slew of brilliant women–including cover girl Fergie!  Black Eyed Peas Fergie wearing nothing but a Dsquared2 blazer on the December 2010 cover of Glamour magazine.  Below are some highlights of what Fergie has to say:

On knowing what she wants to do with her life –  “For some lucky reason or gift from God, I’ve known what I wanted to do since I was a little girl. And even through disappointments and rejection, there was something inside of me that wouldn’t give up. I’m a survivor, and I’m very driven.”

On having faith in herself – “There were periods of my life when a lot of people didn’t believe in me. [But] I still had faith in myself,” shares Fergie, who goes on offer some sage advice to anyone wanting to succeed in showbiz. “I really had to ask myself life questions. Where do I see myself in five years? Create a ladder for yourself, and walk up the steps. Climb that ladder.”

On all the women who throw themselves at her husband –  “For me, I’m not a jealous person,” says the singer, adding, “That’s just not my thing. You have to have trust in your relationship.”