Governor Arnold Schwarzenegger is Soft On Pot On Leno! 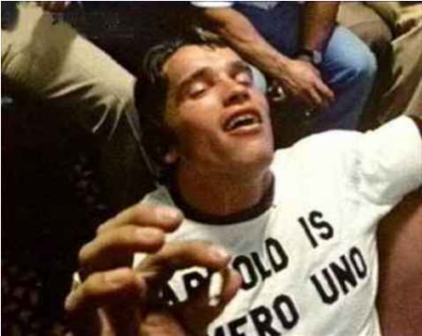 Lets grow a brain because apparently our fearless leaders are missing theirs.   The Austrian Oak Arnold Schwarzenegger on Jay Leno said that “no one cares if you smoke a joint or not” – this from the steroid pumping moron who required multiple major heart surgeries after his bodybuilding career to try to undo some of the damage his use of the anabolic steroids DBOL(methandrostenalone), testosterone, durobolin (nandrolone), winstrol (stanosolol) did to him.  Who the heck is this actor idiot to be giving advice on drug use?

Whether or not marijuana is harmful, very harmful, or deadly, is not the question here.  Although smoking ‘weed’ is certainly carcinogenic, causes memory loss, and leads to multiple accidents on the road, at home, and in the workplace – it is also a gateway drug for many people to hard addictive deadly drugs like meth, coke, heroin, et al – but this is not the point.  The point is that a major actor and Governor of the largest state is not the person to promote marijuana use – obviously.  Does the clown get a payoff from drug dealers for promoting their product?

Like it or not Arnold has clout and can influence people easily to start to use marijuana by his irresponsible statements on Leno.  Is that what he is trying to do – or rather is he just acting cool to prepare the path for the next incarnation of his boring predictable movie career?