Gwyneth Paltrow Had A “Natural Rhythm” With Robert Downey Jr. On ‘Iron Man 2’ 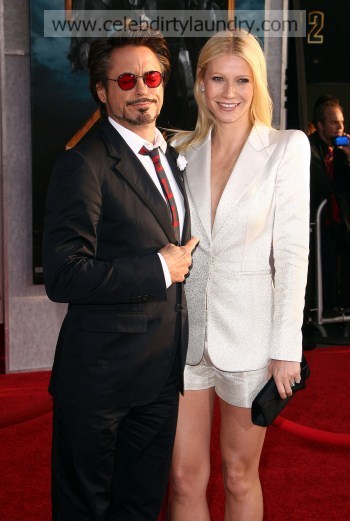 The London-based actress trod the red carpet in Los Angeles for the world premiere of the movie last night (26.04.10) and admits it was a pleasure to work with him on the second instalment of the film – in which she plays his love interest Pepper Potts.

She said: “I love Robert. We had a natural rhythm when we did the first movie together. We’re lucky, it’s not always like that with actors. It was easy to fall back into that the second time.”   ‘Iron Man 2’ follows on from 2008’s ‘Iron Man’, with Robert reprising the role of Tony Stark, who becomes the superhero thanks to an armoured suit he has created.   The movie expands on the cast of the last film, with star performances from Mickey Rourke as bad guy Ivan Vanko and Scarlett Johansson as undercover spy Natalia Romanova.

Recently Mickey admitted he did some unusual research for the action adventure movie – spending time in a Russia’s Butyrka prison.   He said: “I saw a lot there at the prison – and I got a lot more. I talked to a guy at Russia, in my hotel, who had just gotten out two weeks earlier – we spent a couple of hours together, and in those two hours he took his clothes off and showed me all the crazy tattoos he had.”   ‘Iron Man 2’ is released worldwide from April 28.  Photo: Fame Pictures