Harrison Ford Is Trying To Lure Sean Connery Out Of Retirement 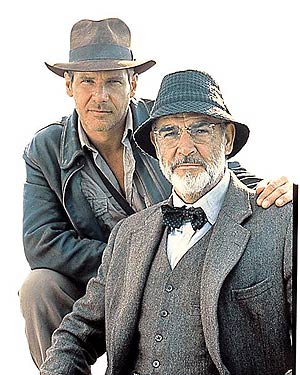 Harrison Ford  is keen for Sean Connery, 80, to reprise his role as his father in ‘Indiana Jones 5’, a part he played in 1989’s ‘Indiana Jones and the Last Crusade’.  A source told the Daily Express newspaper:

“Everyone is keen to get Sean back as Professor Henry Jones Senior. They wanted him back for the last movie.  “Everyone’s hopeful he’ll agree to reprise the role even in a small way. I hear Harrison Ford has been sending gifts to try to convince him. I think he could go for it. It would be on his terms.”

Connery – who turned down the chance to return to the franchise in 2008’s ‘Indiana Jones And The Kingdom Of The Crystal Skull’ – announced he had retired last month as he thought his acting days were “over”.  The former James Bond star said: “I don’t think I’ll ever act again. I have so many wonderful memories but these days are over.”

He said his favourite movie role was as Professor Henry Jones Senior.  Talking about the film, he said: “I was working with Steven Spielberg and George Lucas. The teamwork was special. It was a great adventure and Harrison Ford and Denholm Elliot were wonderful actors. I had so much fun.”