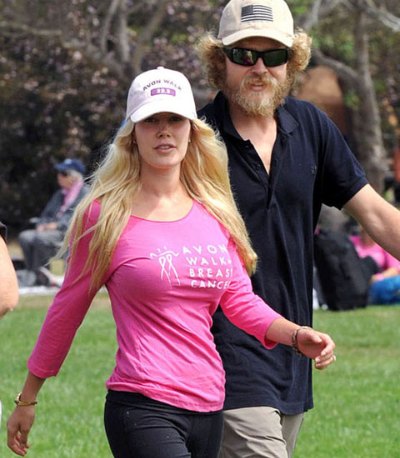 By the above photo, you might be thinking that Heidi Montag and husband Spencer Pratt really care about the Avon Walk For Breast Cancer charity event. But let’s not get it twisted.

According to the event officials, these morons showed up long enough to purchase a t-shirt (photo op), walk a few steps (photo up) and then leave. But good ol’ Spencer doesn’t want you to think that it was just an opportunity to mug it up for the cameras. Of course it wasn’t.

Spencer claims that they “Accidentally happened upon the event, and immediately asked how we could participate. We would’ve loved to walk, but unfortunately Heidi’s surgeries prevented that.”

Trying to prove his point further, he said, “My nana is in the hospital battling cancer right now – so it’s a cause that’s extremely personal to me.” He even got offended when someone suggested it was merely a photo opportunity.

So, let us get this straight. You guys were there for a whole 20 minutes, walked for a minute and left? And that wasn’t a photo op? Heidi’s surgeries were in NOVEMBER of LAST YEAR. They prevented her from walking?!? The surgeries surely don’t prevent her from famewhoring it up on a beach in a bikini in 800 different staged poses.