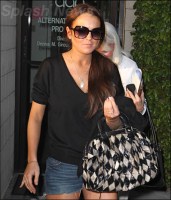 It appears that the person who has been harassing and threatening Lindsay Lohan most via text messages is Sam Lufti.   He is the same creep who helped Britney Spears self-destruct a couple of years ago – feeding her illegal drugs and otherwise ruining her life.  Eventually Britney’s conservators obtained a restraining order against Lufti.

Now it seems that the worst father in history, Michael Lohan, has been in close contact with Lufti – plotting no doubt on the best way to control Lindsay and distance her form his arch rival, her mother Dina Lohan.  Lindsay is a very hot property with huge earning potential and Michael Lohan wants to be as close to her as possible – at any cost.  His attitude seems to be “if I can’t control Lindsay and profit form her then I’d rather see her destroyed.”  Although this seems severe recall that Lindsay’s dad sold her private telephone recordings to press for profit.  The man is a total snake, and that is being harsh on the snakes of this world.

In one text that Lindsay received, Lufti falsely identified himself as “Mike from TMZ” and warned Lindsay to stay away from Dina Lohan, her mother.  The text message linked right back to Lufti cell phone number although, of course, he denies doing it.

TMZ spoke with Lutfi, who claims he didn’t send the messages. He claims the people who rep Lindsay also repped Britney and they’re out to get him. Lutfi claims Lindsay has called him in the past, though sources connected with Lindsay say she doesn’t know Lutfi at all.

Apparently Lindsay’s protectors have been in touch with Lufti, and warned him to stay away from Lindsay and to leave her alone.