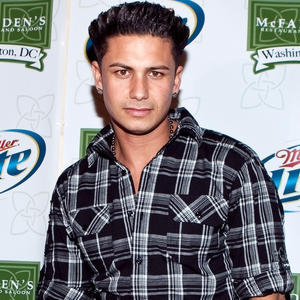 Pauly D whose real name is Paul DelVecchio who is one of the oldest members of the Jersey Shore cast at 28 is getting a spin-off.  The show which is in its second season is making Pauly D a household name.  The Daily Mail is reporting:

‘They have already have a name and of course it will be DJ-related.  It’s another MTV reality show and he’ll be DJ-ing and of course doing things his fans love to watch.  DelVecchio is the first member to score such a deal.”

Although Pauly D will get a new show he wil continue to be seen on Jersey Shore.   I watched Jersey Shore for the first time last week and I can’t say I understand the popularity a bunch of loud mouth low class kids partying, fighting and making out.    I see the appeal for the tv networks – it cannot cost very much to produce the show and for some reason the show has a huge following.  My advice to Pauly D would be grab the money while you can I cannot see your 15 minutes of fame lasting too much longer.